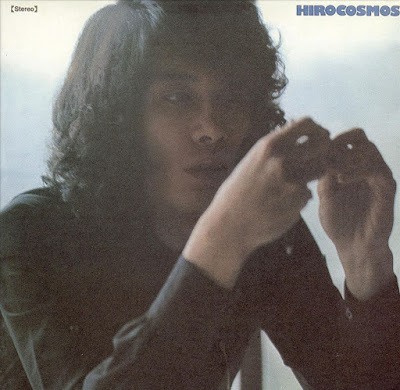 The first album I bought from Hiro Yanagida was his excellent Milk Time, which was a fantastic psych album with all kinds of spacey assets put there to rearrange your poor brain. Hirocosmos, on the other hand, is what I would call a jazzy Canterbury album. Yep, I know Canterbury is a town in England where this rather silly and playful style with bands like The Wild Flowers and The Soft Machine originated. Even so, some of my favourite albums of the style has things like made in Italy or made in Holland written on the back of them...

Albeit with a hefty dosage of jazz incorporated into the flow of things, Hirocosmos sees Yanagida opening his psychedelic keyboard licks up to a quirkier touch - and somehow it feels like these aspects were always there in his playing. I know I personally had to put on Milk Time again just to make sure, that I wasn´t completely gone fishing, and though part of me always is, - I was absolutely right! On this album he simply decided to let his love of jazz shine through, and let me tell you straight away: this guy is up there with the best of them - be that in the keyboards department, mellotron swamps, moog havens or piano resorts - he masters all of them with exceptional skill and ingenuity. I especially adore his work on the synthesizers on Hirocosmos. He uses them very similarly to the manner in which Caravan simplified the solos and sort of kneaded them into the main melody. Sometimes they sound like a futuristic elevator swooping up to the 32.000nd floor - WUUUUUIIIIIIIHHHHHHH, however still retaining an unparalleled gift of flow and juice. The synths reach for the heavens whilst firmly planted deep within the rest of the music

Underneath these terrific lifts of sound, you are treated to everything from low key and pensive piano leaded grooves to blistering fast paced keyboard runs that fall over each other, only to be stopped by the enormous wall of mellotrons, saying " You´d better slow down boy - smoke a doobie, catch your breath and watch the skies for a minute or so". And you know what? Those instruments really listen to one another. (Good thing too, as I wouldn´t dream of the horrors in store, if poor Hiro by some weird shift of faith, altered his persona every time he changed instrument).

Behind the master wizard lurks one of the greatest backing bands, I ´ve heard in quite a while. Swarfega! The drummer sounds like a fusion mix of Bruford, Wyatt and Palmer - tight and meaty like a venus cave, and still he manages to be wild in all the right places, punching out of the stereotypic jazz mould - punishing his kit with some well placed rhythmic karate hits. He´s always a minuscule beat in front of the remaining band, which adds a charismatic and original feel to the music. The only other drummer I can think of who does this, is actually Charlie Watts.

Several times during Hirocosmos a saxophone drops in to say hello. It tells us, that it is about time we headed over to England and Canterbury for a cup of tea. It shares a lot of facets with its brethren from these parts, and just like the other instruments here, it never outstays its welcome. It pops up, sings its tune, and zips away in a hurry. It´s much the same story with the small breaks of flute whistling, though they are far softer and effervescent in nature. Both wind instruments are kind to the different tunes on here and intervene purposefully, when these are in need of something lofty, quirky or comfy.

Keeping it real - pushing the music back towards the early psychedelic lands of Yanagida´s earlier albums, is guitarist Masayoshi Takanaka, who strikes me as one hell of a guy. I mean, if the guy can cuddle with his instrument like that, how is he like at a bar-desk with peanuts and ale? Journeying ferociously in between 2 completely different worlds of sound, he both masters the clean picking jazzy rides that sprinkle some of the more laid back sections of Hirocosmos, but when the time calls for it, he eats a dinner-plate full of habañeros and lava and sweeps the listener of of his feet, and takes him deep within a realm of ethereal beauty and soulful lingering sounds. He is truly a captivating musician, who apparently always knows which way the wind blows - and acts accordingly to boot. You want glistening stars conveyed in tones, then have some.

People who enjoy the eccentricities of National Health, Egg, Matching Mole, Quiet Sun, Soft Heap, and then could imagine these dipped in some spicy wasabi - served up with a side dish of raw tuna and sake - by all means: Go get the next best thing to right arms!
Posted by Zen Archer at 10:02:00 PM