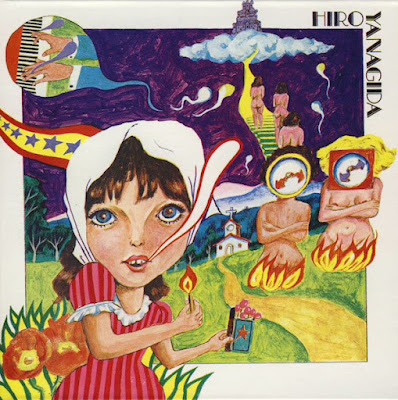 
Second album of Hiro Yanagida is almost equally good as the debut one. "7sai no Rojin Tengoku" (which means "Elderly Person Heaven Of Seven Years". This album is also known under simple title: "Hiro Yanagida") doesn't bring any significant development compared to "Milk Time", but I liked previous record so much that any change in artistic direction wasn't necessary for me. We can find here lots of psychedelic organ and fuzzed electric guitar solos, jazzy drums, some spaced-out experiments (but almost never unlistenable noodling or quirky tape effects like in some other Japanese albums from early days prog...). Poor enjoyment of playing for musicians and listening for prog/psych fans. The only major difference compared to "Milk Time" is lack of violin, however Yanagida and Mizutani (along with with flute, cello & sax players) filled the disk space with enough instrumental virtuosity to keep everybody happy.
1. "The Butcher" - album begin with pulsating Hammond organ which after awhile provides a bit circus-like theme. After 50 seconds Kimio Mizutani joins with very fuzzed guitar and together with noisy-sounding flute creates merry-go-round crazy motif. After several seconds Hiro presents another organ solo, followed by great guitar one. About 2nd minute flutist blows his head off to play some mad whistles...and in the end we can listen to another Hammond solo. Only these guys know how to put so many different ideas to less than 3 minutes composition and make it good enough to not sound like total mess. Splendid beginning!

2. "The Murder In The Midnight" - if you liked "Running Shirts Long" from the previous album you'll also love this one. Maybe it lacks such catchy, main-riff like "Running..." but it's still decent 8-minutes long instrumental with hundreds of extremely fuzzed guitar and inspired organ solos. But the most important is that Seiji Tanaka (or maybe Kyosuke Tokano plays in this one?) all the time keeps the high-dynamic rhythm so you can't be bored even for a minutes. This is truly magnificent, hard as steel psychedelic jam with powerful instrumentals showcase. It can be easily compared to the best moments of Food Brain's sole album. The only complaint I have is about it's sudden ending, which sounds like somebody just cut the tape off and that's it.

3. "Fantasia" - one of the most beautiful composition starts unusual (but what is "usual" for these guys, heh??) with soft flute melody based on harpsichord & cello background. Really gorgous fragment. In 2nd minute Mizutani starts one of his best, passionate electric guitar solo in the vain of Jimi Hendrix (in his most peaceful moments) or Andrew Latimer (from band "Camel" which didn't even exist back then...). Solo is 3 minutes long but never becomes boring. I like that Yanagida always leaves lots of space for his fellow musicians so his solos albums aren't simple organ/piano show-offs.

4. "Good Morning People" - I simply love this marvelous tune! It's incredibly uplifting composition with fabulous sparkling piano (or maybe it's harpsichord or vibraphone?? really doesn't matter), discreet background organ and fantastic fuzzed guitar "eruptions". The main melody sounds kinda childish...but man, you will can't stop taping your foot when you listened to this one! Performance is very tight and even during two guitar solos musicians don't lose the main motif at all. (P.S. Take note Keiju Ishikawa's "woo-woo" bass lines!)

5. "Always" - unfortunately with this track Hiro & Co. seems to lack steam a bit. "Always" is only simple ballad based on piano and discreet acoustic guitar licks. The only interesting thing is that Hiro Yanagida sings (good info for non-english lyrics haters: just like in all other Hiro's albums everything is sang in Shakespeare's' language here) this one by himself and his vocal isn't that bad in fact, only near the end a bit too high-pitched.

6. "The Skyscraper 42nd F" - by far this is the weakest track on this album. Almost 4 minutes of psychotic flute motif just drills a hole in your brain and Hiro seems to randomly hit his piano's keys. And the most horrifying is that all this mess is played louder and faster creating roller coaster (anti) atmosphere. When I talk about over-experimented Japanese prog, I just think about staff like this. Skip, skip...

7. "My Dear Mary" - while most of fans of serious music will call this a cheesy crap and unnecessary filler, I have to admit that I like this "outrageous" ditty. This doo-wop/50' rock'n'roll 2-minutes tribute is just hilarious and so out-of place...that immediately I think it's perfectly IN-PLACE on Yanagida's album! Joey Smith sounds like some wanky Elvis Presley imitator and saxophone solo is ultimately corny as much as it could be in 1971 when this album was produced. What they were thinking?! But heh, I somehow like it, sincerely!

8. "Melancholy" - as title suggest this one is melancholic mid-tempo ballad with backing, Baroque-like harpsichord and fantastic organ waves, especially in closing 2 minutes, atmospheric solo. Yanagida sings again in this one and his voice sounds good, somehow in heavenly/angelic sort of way. Only bass guitar is unfortunately strangely mixed to be up-front and creates rather unpleasant rumpling sound. But it's only small complaint and this fault probably exists because of not so good master tapes' condition.

In general "Elderly Person Heaven Of Seven Years" I can recommend to all fans of 70' psychedelic rock with jazzy hints who enjoy good, spaced-out organ and guitar solos presented in dynamic, groovy compositions along with melancholic balladry, always with decent sense of melody. If you like this staff I can also recommend you other projects featuring Hiro Yanagida: Food Brain, Apryl Fool, Shinki Chen & Friends and - if you can endure very experimental approach - also Love Live Life+ and Masahiko Satoh ("Amalgamation" album). To some extent you can be also interested in more hard rockish but equally good in guitar/organ soling bands Strawberry Path and Flied Egg (both led by Shigeru Narumo).

After this album Hiro recorded another 2 solo albums: simple called "Hiro"(1972) and "Hirocosmos"(1973). While I've never listened to the first one (seems to be very obscure), "Hirocosmos" is a completely different album than its predecessors. Psychedelic rock is almost completely gone in his last effort and jazz tendencies are the most evident.
Posted by Zen Archer at 9:48:00 PM