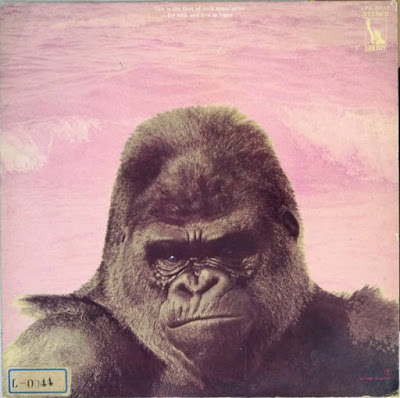 
Hiro Yanagida's debut album called "Milk Time" is a really special recording for me. Along with Food Brain and Cosmos Factory it was one of my first 70s Japanese artists I was listening to. It really rocks hard...& intelligent! Hiro together with bunch of 1st class musicians like Kimio Mizutani and Hiroki Tamaki created truly fantastic psychedelic piece of art. It's incredible how many ideas were included on this relatively short (36 minutes) LP. "Milk Time" is full of different music styles which perfectly fit to each other here. It's also very important that Yanagida didn't completely dominated this record with his organ playin' but left lots of space for his colleagues who can shine equally to Master of Keys. Especially violin and guitar are often pushed in front of the "wall of sound".
Let's check the tracks one by one:

2. "Running Shirts Long" - this a real thing! Almost 9 minutes of outstanding psych/jazz jamming without self indulgence dragging. The main Hammond organ riff from the beginning hits you in your face and presses your body into armchair! Sounds like marching army of giants just behind your back. After that Mizutani kicks in with fuzzed guitar solo which is obviously Hendrix-inspired. His solo is followed by dynamic violin showcase where Hiroki Tamaki proves that this instrument surely belongs to prog rock! When violinist starts to lose steam, Yanagida take over the main "weight" of leading the jam and plays long as hell organ solo. It's probably the best musical moment of this guy in his career. His Hammond sounds violent, swirling, distorted & truly inspired, like from the best The Nice/ELP times, with all of these required noises, hits, roars and slide effects we like so much. Then Keiju Ishikawa takes control with frantic bass solo, followed by drum show off...which is of course the weakest spot of "Running Shirts Long". During most time of the composition solo performances particular musicians are supported by the other creating high-tempo rhythm & background. Unfortunately during drum solo all the other instrumentalist calm down and leave Tsunoda alone so track lose it's dynamism. Thankfully this solo spot isn't so long and everybody comes back in the end with main, groovy motif.

3. "When She Didn't Agree" - in the previous track only Nozomi Nakatani didn't have "his moment". But in this short interlude-like composition his flute is the main actor. Together with Hiro's harpsichord it creates gorgeous Japanese folk-like atmosphere.

4. "Happy, Sorry" - another ingenious composition. This time the leading theme is very jazzy, somehow lightweight and very catchy. Similar like in "Good Morning People" from his second album this one sounds very uplifting and a bit childish. Guitar & violin solos are good as ever, but Hammond solo is a real classic, it's played with a great sense of melody. No atonal noises this time, only pure beauty. Rhythm section is also fantastic, drummer plays some untypical signatures all time, while bassist shines throughout with happy-sounding.

5. "Yum" - very melancholic instrumental only with heavenly-sounding flute and harpsichord which sound like falling raindrops. Beautiful, classical-sounding piece of true art. It's a real miracle that these guys can equally good play long, psychedelic jams and such soft compositions. I guess what kind of modern rock musician would include such peaceful and relatively long (almost 4 minutes) track? Probably no-one... Sad.

6. "Love T" - another atmospheric composition, this time arranged for violin, harpsichord and (most of the time) discreet organ. For me sounds like mix of traditional Japanese music and Baroque classical one. Simply outstanding.

7. "Fish Sea Milk" - and here comes the monster which simply has to be included on almost every early 70' Japanese psych/prog record. Thanks God Yanagida put only one such sh**ty-ditty. Two and half minutes of nonsense noise-making without any direction. Experiment for its own sake. Skip this one before it will drill a hole in your brain. Really, better listen to my advice....

8. "Fingers Of A Red Typewriter" - fortunately after previous disaster Hiro & His Friends are coming back to form with this 8+ minutes jazz-rock epic. First part of "Fingers..." seems to be entirely dedicated to Kimio's guitar pyrotechnics where he can present wide range of technical tricks and mind blowing effects (wah-wah, fuzz, distortion etc.). Before 4th minute Hiroki takes "central stage" and demonstrate as long electric violin soloing. However I have to admit that some of these violin "noodling" in this particular track sometimes become tiresome and slightly not focused. However Hiro all the time keeps as interested with backing organ performance which is - as usual - marvelous. It's only a pity that he didn't decide to join his fellows with his own solo and it would be even better.

10. "Me And Milk Tea And Others" - along with "Love T" this is another melancholic, weep-inducting composition with leading role of violin which sounds somehow Jewish for me (instead of Japanese or Western classical). Jazzy percussion and slow, eternal organ waves fulfill the track very nice. Good closing number.

To sum up: "Milk Time" along with Food Brain project is the best thing ever recorded by Hiro Yanagida. And compared to to Food Brain, we don't have to suffer many boring minutes of complete mess which is "song" called "Hole in the sausage"... The only low point of the record is "Fish Sea Milk", but it's quite short and you can always skip it. As I already said in Hiro's second album review I can recommend this recording to fans of good, old Japanese (and not only Japanese of course!) psychedelic prog. Other artists/bands with similar approach to music are as follow: Food Brain, Apryl Fool, Shinki Chen & Friends, Love Live Life+, Masahiko Satoh ("Amalgamation" album) (all of them with Hiro Yanagida), but also Strawberry Path & Flied Egg (both with Shigeru Narumo on keys and guitar) or solo album of Kimio Mizutani "A Path Through Haze". And in general Hammond organ fans should be also satisfied with this record, however don't expect only keys-based sound here because you'll find much in Yanagida's offering.
Posted by Zen Archer at 9:45:00 PM