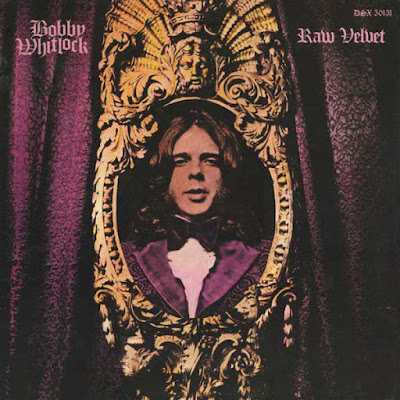 
Co-produced with Jimmy Miller, "Raw Velvet" was Bobby Whitlock's second studio album in less than a year.  Musically the album was divided into a side of rockers ("raw") and a side of ballads ("velvet"), To my ears the collection wasn't a major departure for Whitlock, though this time around there were fewer country-blues tunes; replaced by an emphasis on Derek & the Dominos/Allman Brothers-styled ballads and rockers - notably a cover of 'Tell the Truth'.  The Allman Brothers influences were clearly heard throughout the set's slide guitar moves which were provided by Eric Clapton and Rick Vito.  The real star of the show remained Whitlock's amazing blue-eyed soul howl of a voice.   Exemplified by tracks like 'Write You a Letter', 'Hello L.A., Bye Bye Birmingham', and 'Dearest I Wonder', Whitlock seemingly effortless unleashed the sense of personal pain and anguish that Delaney Bramlett and Eric Clapton could only dream about.   Was it Whitlock's best album ?  Nope.  That said, it's one of those album's with enough charm and surprises to make its way on to my turntable a couple of times a year.

"Raw Velvet" track listing:
(side 1)
1.) Tell the Truth   (Eric Clapton - Bobby Whitlock) - 3:50
At least to my ears 'Tell the Truth' was one of the highlights on the Derek and The Dominos LP.  Whitlock apparently felt the same way, opening his sophomore album with a rousing cover of the tune.  complete with a touch of Elvis snarl in his delivery, this was one of the album highlights.   Over the years folks have speculated about who played lead guitar on the tune.  Familiar possibilities include Duane Allman, Eric Clapton, and George Harrison.  Doesn't really matter who it was since Whitlock turned in a blazing remake.
2.) Bustin' My Ass   (Bobby Whitlock) - 3:55
Enthusiasitic Bonnie and Delaney-styled country-tinged rocker (emphasis on rocker). Killer slide guitar solo and a nice example of what a great voice Whitlock had.
3.) Write You a Letter  (Bobby Whitlock) - 2:28
'Write You a Letter' has always reminded me of Bon Scott and company trying to record a true boogie rock tune.  Wonder what Whitlock had to do to get his voice to get that unique snarl ...  The track featured another killer lead guitar.
4.) Ease Your Pain   (Hoyt Axton) -3:04
The first disappointment, Whitlock's cover of Hoyt Axton's 'Ease Your Pain' was given an irritating old-time Gospel/country feel.  Complete with massive backing chorus, the feeling was about as forced as a chewing gum commercial.  No idea why Dunhill tapped it for release as a promotional single.
5.) If You Ever  (Bobby Whitlock) - 3:19
Hum, kind of a rockabilly tune with some nice Beatle-esque chords hidden in the background.
6.) Hello L.A., Bye Bye Birmingham   (Delaney Bramlett - Mac Davis) - 3:52
Literally blanketed in squealing fuzz and slide guitar, 'Hello L.A., Bye Bye Biimingham' was the album's heaviest tune; sounding like it would have been right at home on the Derek and the Dominos LP.   With Whitlock sounding like he was going to lose a lung, the song also had one of the album's most commercial edges.   Dunhill released the song as a promo single.   s

(side 2)
1.) You Came Along  (Bobby Whitlock) - 3:04
One of Whitlock's prettiest songs - the piano powered 'You Came Along' had a very Derek & the Dominos vibe on this one.
2.) Think About It  (Bobby Whitlock) - 3:09
Another modest disappointment, 'Think About It' started out sounding a bit MOR-ish, before picking up mid-song steam.
3.) Satisfied  (Bobby Whitlock) - 3:00
Pretty acoustic guitar powered mid-tempo number.  Always liked Whitlock's plantaitive vocals on this one.
4.) Dearest I Wonder  (Bobby Whitlock - Paula Boyd) - 3:50
Showcasing some stunning slide guitar and Don Pncher's martial drums, 'Dearest I Wonder" was easily the album's standout performances.  Perhaps worth the price of the album on its own ....   Co-written with then girlfriend Paula Boyd (Patti Boyd's sister), for year's folks speculated Duane Allman played on this track (easy to see why),.  Others guessed it was Eric Clapton trying to sound like Duane.   Finally, in his autobiography "A Rock 'n' Roll Autobiography" Whitlock credited Rick Vito with the stunning slide performance - guess Vito was trying to channel his inner Duane.
5.) Start All Over  (Bobby Whitlock) - 3:25
The highlight of the pretty closing ballad 'Start All Over' came in the form of Rick Vito's chiming electric guitar.  It's always reminded me a bit of something from George Harrison's catalog.

As far as I know, the first single was only released in promo format:

With little promotional support the album still managed to hit # 190 on the US album charts.