The Fanz
1977
The Grand Illusion 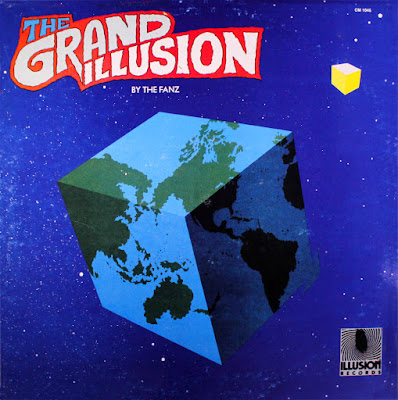 
There is virtually no information to be found concerning The Fanz on the internet. All they left behind was this one album recorded in 1977. Mike Pinera, the former Blues Image guitarist as well as being a member of Iron Butterfly as they began to wane in the early seventies, is credited here with vocals as well as producing and engineering The Grand Illusion. First impressions of The Fanz is that it is mix of fuzzy blues with hints of psyche given the warm if tacky feel of a lounge act, but it's certainly an enjoyable time and a decent album despite the limitations of the recording. The songs are layered with wild solos and Pinera's vocals are put into the mix if only to beef up the songs to give them more cohesion and lose the open ended jam feel. There is nothing too deep or meaningful about the words but this is the albums strong point! It comes across just like a prototype stoner rock album, cosmic blues. "What Is Real" seems to start in the middle of a jam while somebody decided to hit the record button, it's that loose and wild with Pinera's semi coherent and ridiculous vocal lines (_"See My Love, What Is Real Now...SEE My Love..._") spewing up every now and then juxtaposed with some voice box, a nice touch and a classic seventies instrument. The drum sound is mean and tight and at first it might even come across that the drummer Duffy Jackson is a fusion freak but in fact there are two drummers here. Pinera's Blues Image were also noted for using two drummers simultaneously. Well, at least there is one drummer here while another chap, by the name of Little Kenny, is credited with percussion and he certainly loves his Chinese cymbal as he trashes the thing all over the album on a half beat kilter most of the time which can give the music, falsely, some jazz like almost esoteric like structure. The funky "Leaders Of The World" kicks in as smooth as silk and a very heavy and drifting piece of psyche with a neat chorus refrain of "_Leaders Of The World_" with a solid drum kick that punctuates every word. The verses are great and it sounds as if Mike is singing through a beacon with his nose pinched for spacey effect.

Overall The Grand Illusion is a bizarre album, slightly uneven and even erratic but it has got that something special, a chemistry that makes it work if here and there it can come across aimless. Though Pinera played guitar with most of his previous acts he only gets credited with vocals here but Charles Michael who handles the guitar parts does a competent job. There is a neat bass coming through the album especially on the hypnotic and trippy instrumental "Tired And Wired" yet none is credited, though it may well be Pinera and Michael looking after those duties, but what do I know, could even be the keyboard player but there must be a bass in the equation at some stage on the album. The playing, especially the massive guitar, on "Look To The Sky" is straight ahead blues in the vein of a Mike Bloomfield and it is one of the more straighter songs on offer and a fine lazy romp through the blues. "Peace Maker" is a one minute and twenty five second burst of drums and keyboards that might have come from a Spirit session, and in fact Spirit comes to mind on much of this album. Obviously not as refined and defined as the late Randy California's band but The Fanz do a good enough job at that cocky psyche swagger without it being a simple case for plagiarism. Maybe somebody from Florida could know a little more on this band. By all accounts this album was shifted in rather tiny quantities and remains something of an obscurity, though a reissue appeared on vinyl during the mid eighties but again in small quantities. The Grand Illusion is a decent album with plenty of variation to keep the average rock fan happy. Laced with a psyche sensibility and a penchant for sweet distorted blues and flurries of solos The Fanz are a band well worth checking out, but I don't know how this will actually happen since copies of this album are more or less non existent.
Posted by Zen Archer at 11:34:00 PM