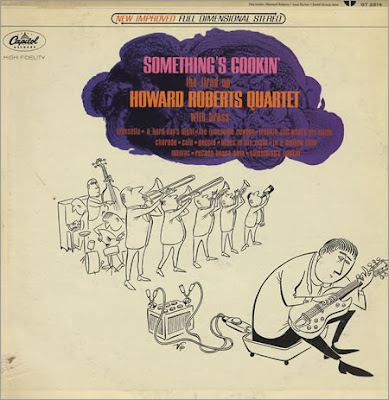 Notes
In this album Howard introduces a new guitar by Epiphone - the "Howard Roberts Model".


On "Something's Cooking" the usual guitar-organ-bass-drums format of the other Capitol albums is enhanced by the addition of a large brass section that is made up of a who's who of Los Angeles studio stars. For that reason, "Something's Cooking" is unique in H.R.'s Capitol output. The musicianship is of the highest caliber throughout the Capitol series of albums.
~ The short duration of the tracks (all under three minutes) imposed an interesting challenge on the soloists: make your solo clear, concise, and interesting. There was no time for meandering. The soloist, especially Howard Roberts, were up to the challenge. Indeed, these albums can almost be considered a tutorial in jazz guitar playing and distilling a solo down to its essence.
~ For those looking for examples of Howard Roberts playing more traditional jazz with extended solo space, you will have to look elsewhere (his Verve and Concord recordings), but if you are looking for an enjoyable, joyful, funky ride through the 1960's you are going to enjoy "Something's Cooking".
~ Highly recommended, although dollar for dollar you may want to consider the Euphoria release that contains both "Something's Cooking" and "Goodies".
Posted by Zen Archer at 3:10:00 AM