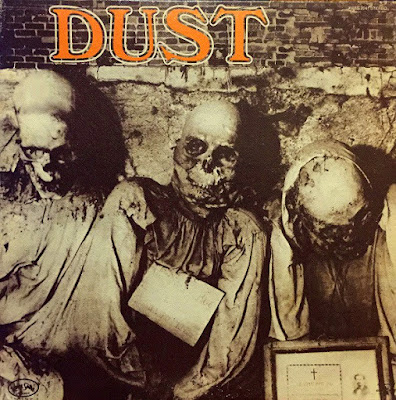 
The first album from Dust is interesting on many levels. The rhythm section featured drummer Marc Bell, who would later join New York punk rockers Richard Hell & the Voidoids, while bassist Kenny Aaronson would sign on with labelmate Stories on the group's third album, as Ian Lloyd moved from bass/vocals to complete frontman. The songwriting team of producer Kenny Kerner and singer/guitarist Richie Wise would go on to produce the third Stories album, making this Dust debut and its follow-up an important piece of the Stories puzzle. Wise's lead vocals on Dust were decent enough to complement his very competent guitar playing; Wise would eventually get hired as A&R man at Scotti Brothers Records. This record is not only the document of a record executive/producer as recording artist, but of musicians who would go on to do more substantial work in the industry. "Stone Woman," with its shimmering slide guitar work from Aaronson, would've fit perfectly on a Leslie West record. What Dust was all about is kind of difficult to get a handle on. A hard rock band for sure, and certainly spirited; the listener has to wonder if the group is successful when progressive, or if things might be better served by staying on the straight and narrow. "Chasin' Ladies" sports a real cool riff and pretty eerie vocal by Wise, while the one song contributed by Aaronson, "Loose Goose," becomes an endless jam. Wise emulates Greg Lake of ELP and, despite the good try, had Dust kept to the poppy influences all these musicians had in them, the group might have had a better chance at success. Kama Sutra, after all, had the Lovin' Spoonful and Sopwith Camel, artists who charted with pop music on the Top 40. For their image, Dust used a photo from the catacombs on the front cover and a camel in the desert on the back. It's an amalgam of hard rock and progressive sounds from co-producer Kerner, who would go on to produce hits for Gladys Knight and edit The Music Connection magazine. Interesting stuff worth hearing at least once.
Posted by Zen Archer at 2:29:00 AM