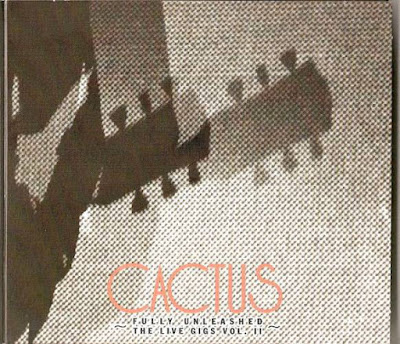 
Considering that the original Cactus lineup only released three studio albums, none of which made much of a dent on the popular consciousness when they were released in the early '70s, there seems to be undue interest in the group's leftovers. This is the third double-disc set within three years from Rhino Handmade on the thudding blues rockers, all of them impressive sellers with the previous volume of live gigs selling out its limited-edition run. While Vol.1 collected performances from the band's early career (including a track from this set), Vol.2 reproduces a single two-hour performance from Cactus' Buffalo appearance on June 26, 1971. Originally recorded by noted engineer Eddie Kramer, the sound faithfully captures Jim McCarty's slashing guitar and Carmine Appice's thumping drums in a concert setting that highlights the band's strengths and weaknesses. Joined on this date by second guitarist Ron Leejack, who had just joined the existing four-piece but didn't last long in the lineup, the sound is fuller, louder and a bit more raucous than Cactus' usual three-piece plus vocal attack. Never the subtlest of acts, the recently expanded five-piece stretches out here, for better or worse, on nearly every track, often pushing the tunes into the excess that the group seemed to thrive on. Guitarist McCarty unleashes his inner Ritchie Blackmore on a solo opening to "Scrambler/One Way...Or Another" and he and drummer Appice were clearly the band's driving forces. Original singer Rusty Day, soon to depart along with McCarty, doesn't have a great voice, but he puts across the songs with passion, and his harp playing, while serviceable at best, adds an edgy bluesy element. The average tune is bloated to about eight minutes with "Oleo" clocking in at over 12, the closing "Evil" extended to 15 (including Appice's nightly drum solo which runs five minutes but seems to be three times as long) and the "Slow Blues (Medley)" unwinding at a third of an hour. All of this is precisely what fans want, even if the band doesn't seem to know when to stop playing. As the only entire performance from the original lineup (plus Leejack) available, it's a solid, sometimes exciting and occasionally excruciatingly overwrought performance. But for the group's cult followers, and there seem to be plenty of them, this is an accurate document of a characteristically sweaty, rip-snorting Cactus show, and presents the act doing what it did best, arguably at the peak of its career.
Posted by Zen Archer at 2:22:00 AM