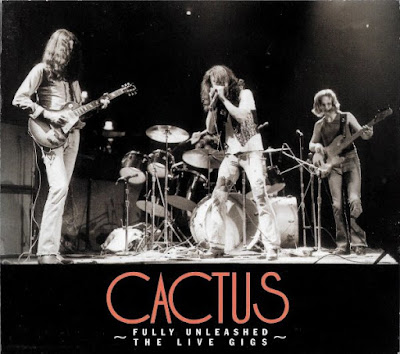 With the exception of a few numbers on assorted multi-artist collections and the trio of tunes included on 'Ot 'N' Sweaty (1972), American blues-rockers Cactus were poorly represented as a performing act until this release. Fully Unleashed: The Live Gigs (2004) is the companion volume to the similarly thorough Barely Contained: The Studio Sessions (2004). Each double-disc package is filled with not only the combo's respective four long-players, but also plenty of remarkable and previously vaulted sides. That is an understatement when considering the two-plus hours of vintage concert material from three distinct incarnations of Cactus, centering on the first lineup's final show on December 19, 1971 at Ellis Auditorium in Memphis, TN. Jim McCarty's wailing lead electric guitar introduction to "Long Tall Sally" is a precursor to the hard-and-heavy onslaught that alternately pulverizes and soars on other classic covers, such as their (dare say) definitive workout of Mose Allison's "Parchment Farm" or the 17-plus-minute oldies medley containing "Heeby Jeebies" and "Money," plus the Memphis-apropos "Hound Dog" and "What'd I Say." The original roster is additionally featured on "No Need to Worry" and another incendiary reading of "Parchment Farm" from the 1970 Isle of Wight performance. Although both were initially available on the First Great Rock Festivals of the Seventies (1971) anthology, neither has been on CD before. A short-lived lineup with Ron Leejack (guitar) was captured on the title track to One Way...Or Another and "Bro. Bill" from June 27, 1971 at Gillian's in Buffalo, New York, and the remaining cuts are from the group's April 1972 appearance at the Mar y Sol Pop Festival in Puerto Rico with Werner Fritzsching (guitar) and former Atomic Rooster member Peter French (vocals). While "Swim," "Bad Mother Boogie" and "Out L'il Rock-N-Roll Thing" were incorporated into 'Ot 'N' Sweaty, "Bedroom Mazurka" can be found on the out-of-print Mar y Sol (1972) compilation.

Wow! Seeing that the tapes of the Memphis concert were finally released brings back some specific memories of that strange December night.
I thought some of you Cactus fans might enjoy a scan of my ticket (see customer images) for the original Cactus' last performance in Memphis' Auditorium Music Hall (touted to be acoustically perfect) on December 19, 1971. It was a memorable night. In the days following the concert, we found out that the band had a "falling out" and that the lead guitar (Jim McCarthy) had quit and that the live album would not likely be released. In retrospect, there may have been a lot of tension on the stage that may have contributed to the intense energy of this Memphis performance.
Fully Unleashed: The Live Gigs
Some of you with sharp eyes will probably question whether I really attended the concert since my ticket is obviously not torn in half. That segues into a rock concert almost-disaster story that I've never seen reported. My friends and I had just arrived home for our Christmas break during our first semester of college and were fired up about unwinding with a @#%$ kickin' rock concert. Cactus was just the band for the occasion. We got really good seats on the lower level about halfway back in the middle and were anxious to get in the Auditorium and get to rockin'. We arrived with the first wave of fans and were allowed into the foyer areas of the auditorium, but the doors into the Music Hall were barred, so we all stood and waited.......and waited..........and waited. Someone spread the word that since it was to be recorded for an album they were being very particular about their sound checks. Tickets were to be taken as attendees entered the Music Hall so no one was stopping the crowd from entering the foyer area and it began to get more and more crowded and packed with people and began to get extremely claustrophobic and very hot. As people continued to pack into the foyer areas outside the entry doors, we began to get squeezed together so compactly that I distinctly remember thinking that I could pick both feet up from the floor and that I would not likely move. But still we waited...and the crowd got tighter...and we waited...and it was getting scary-crowded and hard to breathe. As I began to almost panic from the ever-increasing pressure from the folks around me, there was a tremendous "boom" sound and the crowd began to surge towards a door like water breaking through a dam. We were literally swept into the lower level of the Hall by the surging crowd, but miraculously, no one fell down and got trampled. At least I was not aware of any injuries, and was personally so relieved to be out of that situation that a natural "high" set in from the adrenalin rush of escaping the danger. We found our way to our seats without ever encountering anyone to take tickets. We later learned that the force of the crowd had broken in two of the double doors leading into the arena. There was then an announcement over the PA that the concert would not be allowed to start until everyone went to their actual ticketed seats. Amazingly, it seemed like everyone immediately complied. I don't recall seeing any arguments over seats.
FINALLY Cactus took the stage and gave one of the most intense, butt-kickin' boogie-rock performances that I had ever seen. I remember thinking that I had never seen a bass player take front-and-center and tear off lead-like riffs the way Tim Bogert did on at least one of the numbers. As I recall, he was up front in a semi-crouch with his bass held almost vertically just riffing the heck out of it. I'm not sure, but that may have been the number that a very attractive girl walked slowly towards the stage down the aisle to our left and removed her halter top and clutched it over her bare chest staring dreamily at Cactus. this was NOT a common occurrence in Memphis in 1971! What a concert!

In hindsight, perhaps the long delay wasn't due to sound issues......maybe the band was deciding whether even to perform or not. The rumor was that Jim quit Cactus that night after the concert.
Forgive an old guy his youthful ramblings, but seeing these CDs kinda took me back to a most-interesting era. Hope you don't mind my sharing my memories of Cactus' "last gig". Keep on rockin'.
NENE22