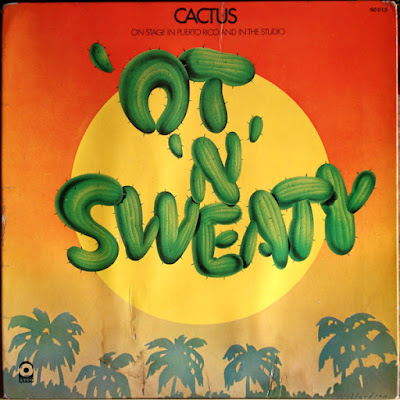 
This is the last album recorded by Cactus, and the one and only official release of live material by this fabulous band. The original LP had only three live songs (Swim, Bad Mother Boogie and Our Lil' Rock'n'Roll Thing), recorded at Mar Y Sol Festival, and five others recorded in the studio. The band had passed by some changes: original members Rusty Day (lead singer) and Jim McCarty (guitar)were replaced by Pete French (vocals), Werner Fritzschings (guitar)and Duane Hitchings (keyboards), all of the fine musicians. The live portion of this album is frantic and plenty of energy, and the studio tracks are all very interesting (Bedroom Mazurka is my favourite, by the way), but Cactus were falling apart. Founder members Tim Bogert and Carmine Appice would play with Jeff Beck, and Hitchings formed The New Cactus Band, with disappointing results. But if you really like rock'n'roll, boogie and hard rock, don't miss this album, it will make you smile every time that you play it. Look for an obscure release by english label Rarity Records, because it features three bonus tracks: Bedroom Mazurka (recorded at Mar Y Sol), and No Need to Worry and Parchman farm (recorded by the original 4-piece Cactus).
Posted by Zen Archer at 3:09:00 AM