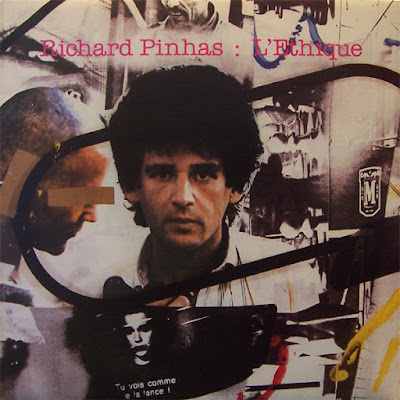 
I'm going to quote the Wayside Music site because they say it better than I can. "During a fairly incredible 7 year run that began in the mid 1970's, Richard Pinhas released a large string of influencial albums; 7 by HELDON and 5 under his own name, all of which attempted in one way or another to meld (Avant-garde) Rock music with Electronics. "L'Ethique" was his final release of that 12, recorded in 1981 and originally released in 1982. It was his final solo album before his musical retirement throughout the 1980's and it's one of his great "classic period" works. It also features the only studio recordings by the short lived Richard Pinhas Band.This group featured a great cast of musicians who had all previously played in MAGMA. Clement Bailly (drums), Patrick Gauthier (synthesizers) ( also of HELDON and WEIDORJE) , Bernard Paganotti (bass) (also of WEIDORJE) and Richard on electronics, synthesizes and guitar." I also would mention J. Philippe Goude (minimmog, percussion) and Francois Auger (drums) just because i'm big fans of both.Yes it would be another 10 years until we'd get another album from Pinhas after this one.
"L'Ethique (Part 1) has this electronic beat with bass and percussion as synths join in.The guitar comes in soloing around 3 minutes. It settles right down after 4 1/2 minutes and we get spoken word samples and atmosphere taking over. "Dedication To KC" opens with guitar as drums and bass join in. It turns KING CRIMSON-like before a minute and those angular guitar excursions kick in before 2 1/2 minutes.This really reminds me of BI KYO RAN. Intense stuff. It changes after 4 minutes as the intensity levels off then it picks back up before 5 1/2 minutes.

"Melodic Simple Transition" builds and we get an uptempo beat in an electronic soundscape. I like it ! "Belfast" has these different electronic sounds that come and go in a rhythmic pattern. Drums after a minute and bass too.This is so good as those electronics continue.The guitar after 2 minutes is lighting it up. "L'Ethique (Part 2)" sounds great with the guitar grinding away in the background. "The Western Wail (Part 1)" is minimoog crazy early on then the drums join in.This is uptempo with lots going on. Percussion too as the guitar joins in. It settles down before 5 minutes then the rhythm stops before 6 1/2 minutes as we get random drum patterns, guitar and more.

"L'Ethique (Part 3)" has these sounds that echo along with samples and atmosphere. It's getting louder and drums join in.It settles down around 4 minutes to a spacey mode. "The Western Wail (Part 2)" is dominated by synths. Beautiful stuff right here. "L'Ethique (Part 4)" is a short elecrtronic piece. "Southbound" is my favourite because they just rock out like a Metal band. The drumming from Auger is relentless as is the guitar from Pinhas. Gauthier is on bass here adding depth. A powerful and intense track.

An interesting album where those spacey soundscapes take a back seat as the guitar, drums and bass come to the fore.
Posted by Zen Archer at 5:47:00 PM