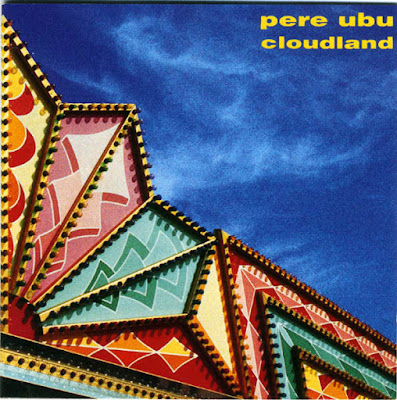 In a press handout that accompanied the original release of Pere Ubu's Cloudland, David Thomas quipped "We'd never been asked to write a pop record before. I guess it never occurred to anyone." Given the sonic Dadaism of much of Pere Ubu's work, what's most startling is not that it took so long for someone to suggest they make a pop record but that they were able to comply so successfully. Stephen Hague, who had previously worked with the Pet Shop Boys, Orchestral Manoeuvres in the Dark and New Order, produced these sessions, and Cloudland boasts a glossy surface that was unprecedented for Pere Ubu's work; the drums sounded crisp and tight, the songs included traditional melodies and melodic keyboard lines, Allen Ravenstine's noisy punctuations were pushed to the back of the mix, and the harmonies sounded as if they were performed by actual professionals. However, beneath the hipster friendly production, Cloudland remained a Pere Ubu record -- David Thomas' yelping vocal style was as unrestrained as ever, and while the tunes here lack the sharp angles of Pere Ubu's first era, the lateral sway of the melodies is still cheerfully off kilter. Lyrically, Cloudland finds Ubu moving cautiously from their passionate defense of the Midwest's industrial wastelands to a look at the broad plains that lurked elsewhere, as if they were looking for sunnier climes like many other denizens of the Rust Belt and finding many strange, troubling and wonderful things in their new surroundings. Ultimately, Cloudland showed that however much you dressed up Pere Ubu's music, their heart and soul would show through, and that is a very good thing. [In 2007, Mercury Records reissued Cloudland in a new remastered edition created with the input of the band. The new disc includes two non-LP B-sides, "Wine Dark Sparks" and "Bang the Drum," as well as a live BBC recording of "Bus Called Happiness" and alternate mixes of "Breath" and "Love Love Love." David Stubbs' liner notes describe the circumstances behind the making of the album as well as Thomas' lyrical themes on this material.]
Posted by Zen Archer at 12:19:00 AM