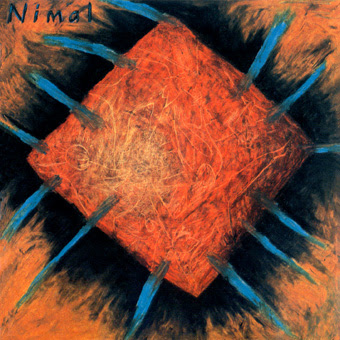 If you thought you had problems distinguishing RIO from what the Archives call Avant- Prog, things are not about to be simpler if you pick this album up. This project is the second stage of Swiss Momo Rossel and JV Huguenin's (Rio-extraordinaire multi- musician) three-stage musical rocket. After Debile Menthol at the start of the 80's and before L'Ensemble Rayé at the start of the 90's, Nimal is has released three albums, of which this second one is the best-regarded by specialists. Half the album was recorded live in a festival, but you'd have a hard time guessing it, from the quality of the recording but also no public: the odd between tracks spot you hear applause. The live half is much better and livelier than the first studio part. Most likely, this was either two different Vinyls or two separate releases. There are a few new versions of tracks present on their first album.
Just like L'ER, this group uses predominantly acoustic instruments (only a few electric guitars), but the music is much more twisted, much wilder and more challenging for the casual listener. If it could appear that L'ER was a bit light on prog rock contents, Nimal certainly changed that and they sound a bit like a crazier Miriodor crossing Alamaailman Vasarat, the presence of the accordion helping on this last reference. The instrumental music (certainly not described by the album's title) veers from Circus music to atonal (even abstract at times) music to a rather positive (and happy) kind of Univers Zero. Interference Sardine is also not far.

Most of the tracks are quite energetic, some even reaching diabolical and frenetic pace with the cellos going nuts (James River), some even reaching infernal chaos (Animal Triste's start) others are radiant and happy (Le Soleil and La Marelle), but the huge majority of the Rossel-penned tracks are very impressive.

Personally if you ask me, I find Nimal much better than L'ER, even if they will be much less of a cup of tea of your non-prog entourage, but then again as most progheads come from a rock background, chances are that you will not really play L'ER or Nimal to your buddies, but your chances to get laid are better with L'ER. An excellent album, but not one to recommend to newcomers of the Avant/RIO realm, Voix De Surface is Nimal's best shot at Prog history. Haunting and just short of stunning!!!