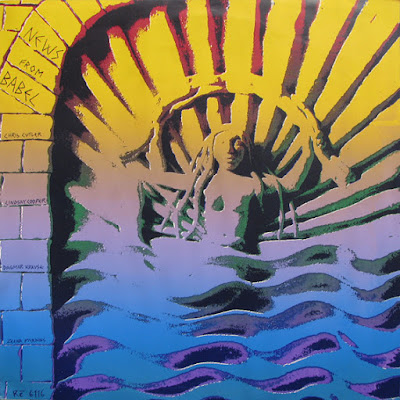 Not exactly a band in the traditional sense, NEWS FROM BABEL were a studio project that combined the talents of woodwin player Lindsay Cooper (HENRY COW), American harpist Zeena Parkins, and drummer Chris Cutler as well as vocalist Dagmar Krause (both from ART BEARS). Being direct descendants of these RIO bands, their style is very much 'out there' although not as wild or intense. Coming together after HENRY COW's dissolution in 1978, the foursome released a couple of albums and then broke up in 1986.

Very much in the RIO tradition, both albums are filled with energetic and playful cacophony, unusual chord progressions, odd-time signatures (where drummer Cutler's distinctive style shines), vocal squeals and shrieks, but also unexpected sensuous and fluid passages that take on chamber music-like tones, all nicely complemented by Zeena Parkin's harp. Their first release, "Sirens and Silences/Work Resumed on the Tower", features guest Phil Minton whose unusual voice goes hand in hand with the radical/political nature of the lyrics. On their second album, "Letters Home", Robert Wyatt handles most of the vocals with the occasional contribution by Minton, Dagmar Krause and newcomer Sally Potter. All music was written by Cooper, all lyrics by Cutler.

Their type of RIO could appeal to a wider audience but the ones most likely to appreciate are fans of HENRY COW and especially ART BEARS.

NFB can be consider as Henry Cow Mk4, Slapp Happy Mk3 or Art Bears Mk2, as the continuation between the projects is rather obvious and even constant. Taking off where Art Bears left off, the appearance of Bostonian Zeena Parkins has changed the musical bents as well. With the debut album SAS/WROTT (made from two chapters), Dagmar Krause's voice is a strong reminder and link to art Bears but inevitable Slapp Happy as well. In the second album, Letters Home, Robert Wyatt takes the main vocals duties and is doubled by Sally Potter. But of course this project is yet another spin-off from Henry Cow's wind and keys mistress Lindsey Cooper (the lone composer) and percussion master Chris Cutler (the lyricist). The music is severe yet playful, cacophonous but also unexpectedly sensuous at times, abusing unusual chord progressions and odd-time signatures, shrieky vocal squeals to make haunting chamber music, nicely complemented by Zeena Parkin's harp.
The first part of the album, Sirens And Silences, is relatively difficult of access as NFB develops a somber chamber rock (not too far from Univers Zero) where unusual bassoon and sax-playing along with sometimes dissonant harp are setting the mood as cold and rigid and an almost-medieval tinge, reinforced by the mostly-acoustic instruments. Krause's vocals are not really helping either (especially given Cutler's strongly aware lyrics), as I was never a fan of her timbre as well as the type of singing she chooses. Work Resumed On The Tower is a much better (and more riveting) piece, with a wider musical scope and often brinks on the dissonant, while never really overstepping the borderline. Arcades Of Glass (incredible tension from the harp) and Anno Mirabilis (some finally exciting singing and its extreme sax wind-extracting as background) while Victory uses some greater musical dynamics as they enter Eastern European gypsy folk. This debut album ends much better than it started.

The ReR label has reissued both albums in a 2 on 1 retrospective, gave it illustrations (intriguing and appropriate drawings for the debut and haunting photos for the second) makes it the obvious acquisition. Please read the individual album reviews to get fuller impressions.
Posted by Zen Archer at 5:54:00 PM