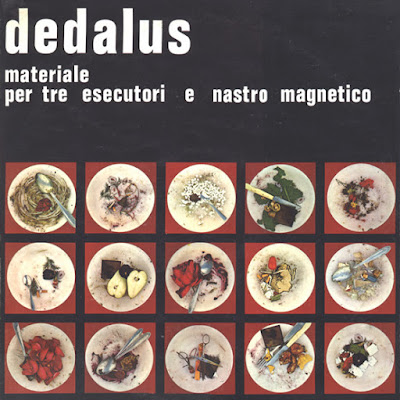 
Well one thing is for sure. DEDALUS showed on their debut album that they were certainly open-minded and willing to take risks and experiment but absolutely no one, especially the jazz-rock-fusion fans of their debut could have seen this one coming. For some reason, DEDALUS decided it was time to move on after one album of primo jazz-fusion workouts and go to even stranger pastures. In this case they took on a real career killer and tackled musique concrète and pointillistic surrealism. The result is an album that gets almost universally panned for it sounds absolutely nothing like the debut and i can only imagine how many jazz-fusion lovers over the years have fallen for the debut only to scratch their heads after listening to this one!
Part of the situation was that the bassist Furio De Castri parted ways after the debut. Instead of the sensible decision of replacing him, the remaining four members decided to let their freak flag unfurl full staff and really go for it in the experimental department which pretty much destroyed all momentum they had built and pretty much ended their musical credibility. Instead of syncopated jazz rhythms mixed with solo tradeoffs and spaced out freak outs, we get a series of clanging cans, breaking bottles, piano sweeps and various other noises such as cats meowing, operatic meanderings and whacked out outbursts. There are still traces of jazz here and there with drum rolls, sax runs and even violins but they appear sporadically. There are also scant outbursts of melodies that are fleeting but nonetheless present themselves.

For anyone to enjoy this they must really have had some exposure to some of the avant- garde music of the 50s and 60s. There reminds me a lot of John Cage and his surrealist musical vision and the strange musique concrète of Edgar Varèse but most of all i get a Karlheinz Stockhausen vibe whose pointillistic musical impressionism is the main focus here. Like a good impressionalist painter, DEDALUS paints sonic textures with bloops and bleeps and scant traces of an underlying motif. I like to think of this in general as a ride in a canoe with the chaotic swirls and eddys of water that surround the canoe as the main focus that lead to an underlying object but only as indirect evidence that has to be mounted to come to the final conclusion.

Yes, this is ridiculously convoluted and complex and most listeners will not give this the time of day, but i personally find this kind of music stimulating on rare occasions. I think of this as the musical equivalent to those rare nutrients that the body needs like molybdenum that are only needed in the smallest of doses but yet are essential for the overall health of an organism. There is something about listening to this on the rare occasion that is kind of like defragging your computer. It just kind of makes melodic music sound better! Maybe i'm just a disturbed individual for finding any joy in this whatsoever, but being familiar with the avant-garde classical artists that preceded has aided in my understanding. Admittedly, WTF were these guys thinking?!!! This pretty much ended a promising career and they should have at least put out a couple more stellar jazz-fusion releases before doing anything this alienating to their fans.

As a litmus test you can ask yourself if you can tolerate Area's "Caos" from Maledetti and if the answer is yes, then you can take that track and make a whole album out of it and it will give you a hint of what's going on here. I certainly wouldn't call this essential but this certainly is more than random noise going on. Like the invisible canoe on the flowing stream that creates wakes and hydrologic distortions, this music is the impression of an underlying unheard musical structure that demands your full attention and multiple listens to discern. There are occasional classical motifs that just briefly bubble up from the underworld. This album is tacked on to the end of remastered versions of the debut album. It may not be essential but is well worth it if it's a freebie and can satisfy one's utmost strangest musical urges when the mood hits, at least it does for yours truly.
Posted by Zen Archer at 6:28:00 PM