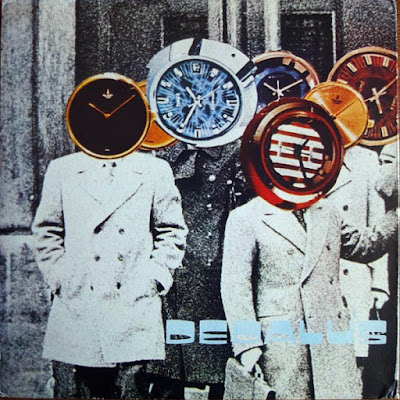 
DEDALUS - not to be confused with another Italian 'DEDALUS' who mix folk with jazz - were a most enterprising 70's jazz-rock quartet from Turin who still keep a high public profile among collectors. Evoking SOFT MACHINE but with an emphasis on keyboards, they use the violin, synthesizer, guitar, sax, cello, bass and drums; their style is more experimental and spacer than other Italian jazz-rock bands (KALEIDON, DUELLO MADRE, PERIGEO). After a first album in 1973, they lost their bassist and went on as a trio for a second album; they then lost their drummer and split up. In 1990, they reappeared for a third album that featured the original line-up minus the drummer. After many personnel changes, the keyboard player reformed the band under the name The BONANSONE DEDALUS GROUP who released a fourth album in 2004.

The eponymous first LP was their most SOFT MACHINE-like album, featuring some particularly spacey experimentation. "Materiale per Tre Esecutori e Nastro Magnetico" (1974) contains some highly complex music in a contemporary classical vein à la John Cage or Edgar Varese; it is also marked by a stronger use of electronics (no doubt due to the loss of their drummer). The privately released "Pia Visione" (1997) tried to revive the original spirit of the band but with a very minimalist approach. As for "Nomos Apache Alpha" (2004), it has a strong classical chamber music feel as it is mainly cello and flute based.

One of those 70's psychedelic treasures catching the essence of jazz rock with heavy grooves and hypno/experimental effects. The first track is a quick, electric jazz trip with abundant but linear guitar solos. Some nice keyboards parts accompany the jam. "Leda" is a floating jazzy tune with hyperactive psychedelic tones thanks to the use of amazing, atmospheric organ parts. The second part of the composition features a rather dreamy, spacey, evanescent soundscape punctuated by acid-psych bass grooves. "Conn" consists of improvisations with jammin' sax parts and really bizarre sound collages from a wide variety of instruments. "C.T.6" contains an elegant technical solo guitar sequence closed to Mc Laughlin's style. Not easy to approach for neophytes but highly recommended for convinced fans of jazz rock weirdo like Embryo and classic fusion jams from Miles Davis.