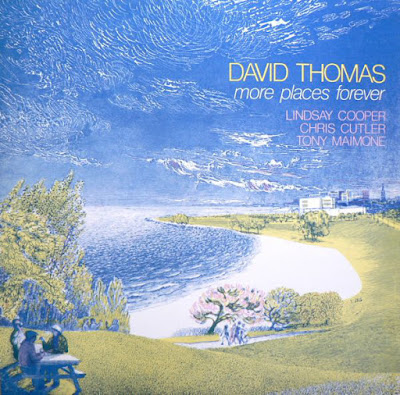 
On David Thomas's first two solo albums, the presence of guitar god Richard Thompson tended to temper Thomas' natural inclination toward pastoral loopiness, grounding it in a measure of rock & roll solidity. On More Places Forever, Thomas is accompanied by bassoonist Lindsay Cooper, bassist (and old Pere Ubu hand) Tony Maimone, and drummer Chris Cutler, and the difference in sound is striking. Maimone and Cutler, who are a fearsome rhythm combination, do keep the groove rolling on most of these tunes, but nothing deflates a rockish ambience quite as effectively as a bassoon; as a result there's a certain daintiness to everything on this album. That's not to say it isn't compelling, just that it's compelling in a very different way from Thomas' earlier solo work. "Whale Head King" features insect and bird sounds as well as a strange, distant vocal mix and a lyrical reprise of "Happy to See You" (not to mention musical quotations from "Three Blind Mice" and "Shortnin' Bread"). The plodding, slightly creepy "New Broom" sounds like a Halloween song; the multi-tracked bassoons on "Enthusiastic" alternate between polka-inflected chord chomps and klezmer wails. It's great stuff, but probably of more interest to fans of the Art Bears and Henry Cow than to fans of Pere Ubu.
Posted by Zen Archer at 12:43:00 AM