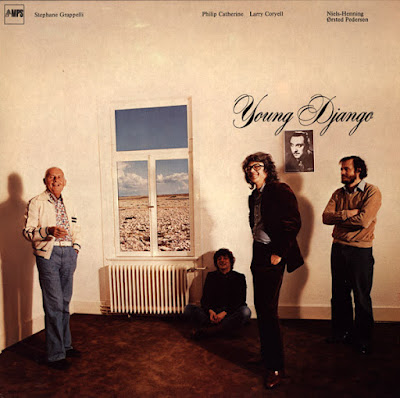 
Album is credited as Various Artists: "Young Django" on the spine.
Recorded: January 19-21, 1979 in Tonstudio Zuckerfabrik, Stuttgart/West Germany.
That's Larry's and Stephane's voice (in that order) after "Swing Guitars" and Larry talking before the "Blues".


Lately the music of Stephane Grappelli and Django Reinhardt has been appearing in movie soundtracks. For example, Minor Swing is in both Chocolat and as the lead track in the movie Town and Country. As a result people are rediscovering their music.If you are interested in exploring their music this CD is a wonderful place to start. It is a true classic and one of Grappelli's best. Stephane Grappelli was the king of the Jazz violin from his twenties till he died in his late 80's, a reign of over 60 years. He and Django Reinardt were the founders of the Quintet of the Hot Club of France, the most influential group in European Jazz history. Stephanes music has a wonderful joyful youthful exuberance, and he has improved as he has aged. On this album , he was only age 71, and he was in his prime. Here he teams up with Philip Catherine (young Django) and Larry Coryell on guitar, and Orsted-Peterson on bass. All of the tracks are good, all except 4 and 5 are great. All in all one of the greatest Jazz Violin albums ever. Highly Recommended.
Posted by Zen Archer at 2:07:00 AM