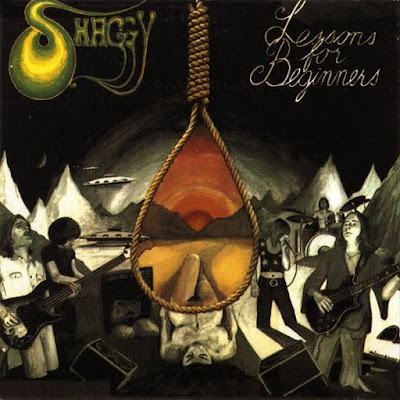 Shaggy was formed in Gothenburg in 1973 and the group was heavily influenced by Deep Purple, Uriah Heep and Lucifer's Friend. They played an energetic progressive rock as well stand comparison with their role models but also with Swedish Blåkulla, Solid Ground and Rhapsody.

Tom Ryan in the group was from England and Kurt Kästner from Austria, the other was Swedish. The internationally known group Nazareth had heard Shaggy's album and wanted to do a cover of the song Destination Nowhere but the group denied them that, something that they later regretted. Shaggy also supported the band Sweet at Scandinavium 1975 and afterwards Sweet's guitarist (Andy Scott) wanted to produce their second album, something that sadly never happend. When the band broke up Tom moved back to england and Jan Rogås joined Rhapsody.

"Lessons For Beginners" is said to be a top album, but is one of the most difficult hard rock vinyls to find from the 70s. The album was bootlegged (illegally) on CD in 1998, the quality of the CD-reissue are not so good and transfered directly from a crackling vinyl rip. The band still have the original mastertapes and have been talking about an official CD release in the future.
Posted by Zen Archer at 7:28:00 PM