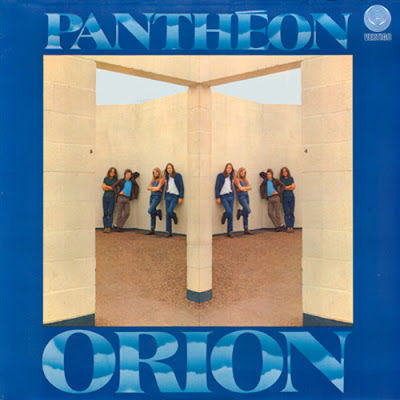 
PANTHEON comes from the Netherlands Canterbury scene of the early 70s. They began their career as a high school band in 1971, beginning with five members, and they won first prize at a national talent contest in The Hague at the annual Rekreade Festival. The win culminated in a recording session with record company Phonogram.

The recording led to a number of live performances, such as Pop temple Paradiso and a number of other large concert halls drawing in fans of the progressive scene. The band even opened for legends such as FOCUS and SOLUTION.

A second single followed, "Daybreak / Anaïs", and received airplay on radio and television. Phonogram producer Tony Vos, resolved to record an album in 1972 with the band. "Orion" became the sole album for the band before they disbanded, released on the infamous Vertigo label. "Orion" received some critical success, and through Paul Acket's booking agency, the band were playing concerts abroad, as a supporting act for MUNGO JERRY during their Switzerland tour. PANTHEON were also the opening act for THE STEVE MILLER BAND in the Doelen, Rotterdam, another career highlight.

Lack of financial and commercial insight, along with a cocky attitude towards the record company and booking agencies, led to the band breaking up. There was a failed attempt to reform with a new lineup including ex-FOCUS drummer Pierre van der Linden. They played at various revival concerts with the original line up up to 1992 before calling it a day.

This album is the only album from a dutch band to be released on the Vertigo "Swirl" label. It is also the only album Panthéon ever released. Panthéon made music similar to Focus and Solution. Jazzy, canterbury like progressive rock. They started as a fivepiece highschoolband and won a recording session at a national talent scout festival. The recorded single gave them attention and this paved the way to record an album.
The album opens with Daybreak, which resembles Focus' House Of The King a bit. The melody is played by the flute and it has a guitar solo in the middle. There are also some wordless vocals like Thijs van Leer could have done. Anaïs also reminds me of a softer song by Focus, again the song is driven by flute and guitar. It is a very peaceful track. With Apocalyps the sound changes more to the Solution direction. The main instruments are saxophone and organ, although the flute appears on this one also. This is a very sunny and jazzy track. The Madman is a funny short warm-up piece that leads to the highlight of the album, Orion. In this track both the Focus and the Solution side come together. It contains great melodies. I mention Focus and Solution a lot in this review, but that doesn't mean that Panthéon are just copy cats. They have an unique sound of their own, it is just to point out in which corner of the proglandscape Panthéon can be found.