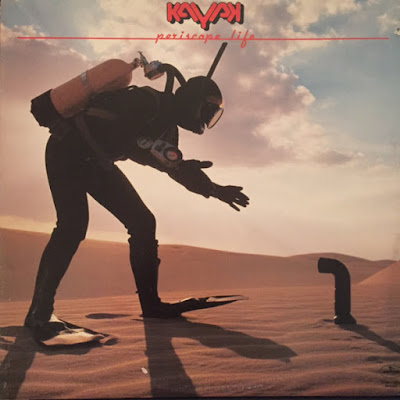 
Recorded between October and November 1979 at the Village Recorder, Los Angeles.
Track 12 & 13 recorded 4 January 1980 in the Soundpush Studios, Biaricum.


Periscope Life is the most pop-orëntated album of Kayak. That absolutely doesn't mean it's a bad album! I can understand that this album came as a little dissapointment after the beautiful and succesful "Phantom Of The Night". Where that album had her symphonic and mysterious moments, this record only contents more "happy" tunes, uptempo songs and nice ballads. It's less emotional, but the sound quality is a lot better and the band plays really nice. Their sound is more "full" and balanced than before. Of course, the power of Kayak consists of strong melodies, and so they are on this album. "Stop That Song" is wonderful pop and "If You Really Need Me Now" is a very good ballad, with a strong melody in the chorus. The album also contains 1 instrumental: "Lost Blue Of Chartres" which was used as a theme in the Dutch movie "Spetters". With "Anne", Kayak created a beautiful single, that did not topped the charts as high it deserved. "Sad To Say Farewell" is another tricky ballad. Wonderful melody, and again, strong in the chorus. Note the excellent vocals of Edward Reekers, he is a great singer. This is no album with long symphonic tracks and exciting synth-work, but a poppy album, with great playing, melodies and highlights whick makes this album fitting pretty well in your progressive collection. Not Kayak's best album, but surely one of the most direct and balanced ones!