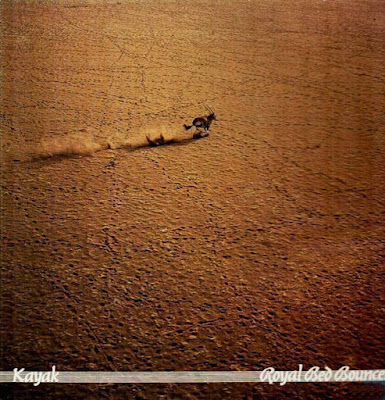 
Yeaaah another great Kayak album! Referred at as 'the hyperactive album' by a friend of mine it starts of very speedy with title song 'Royal Bed Bounder'. The strange title refers to a royal wine taster who also had to jump on the beds of the royal family to find out wether there were knifes to be found under the pillows. And as they played the songs at a concert in 2005 wich I attended (ofcourse!) the song has proven to be timeless.
Actually this is an album in the line of See see the Sun, the Second and just one step away from the perfect The Last Encore. It has beatifull melodies, great rock moments, perfect ballads (I very much like the last short song 'My heart never changed') and above all it feels as a whole. The last argument being typical of Kayak. The first albums sound like they are totally completed. When the record is finished you get this warm feeling. The mixing of the songs on the album is like a composition itself.

About the music. Kayak can be complex, sometimes more like pop, or even abstract. Max Werner, original a drummer who had to sing in Kayak, does a great job. The sound of his voice needs some time to get comfert with though.

One thing is important about this record. You just have to buy the LP record instead of the cd! The cd sounds not half as good as the original LP record. This can also be said for all Kayak's first five albums. I think this is also the reason for all the underrated albums of Kayak. The digital sound ruins the Kayak vibe wich is so enormously strong on the LP records. Kayak is a mood, is has a special vibe nowhere to be found in other bands. One could find a connection with the early Genesis with loats of fantasy though.

Enough said. A great continuation of the Kayak story. The album also contains songs they still play live, so a musthave for the fan.