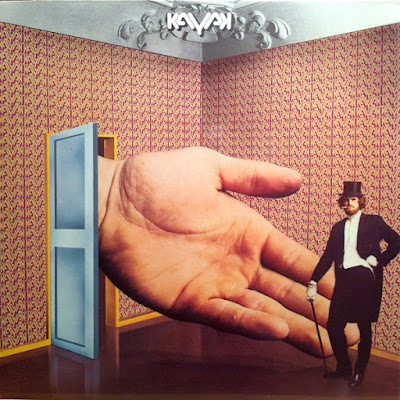 Kayak had always been a strange band. Leadsinger Max Werner was a music academy drummer, while drummer Pim Koopmans was a music academy keyplayer. Keyplayer Ton Scherpenzeel was also from the academy and so the circle was round. Max Werner didn't like his own vocals, often referring to the fact that the songs were to high in pitch and he had to use his second voice very often. A sound the fans, including me, still like very much. His high pitched voice and somehow warm pronouncing of the words give the music an emotional feel of strenght threw weakness. Most of the songs of Kayak were keybased, consisting of songs and some epics. On this record Kayak decided to add two long tracks; They got to know me and Trust in the Machine, making it one of their most progressive album. The sound of Kayak is between Yes and Genesis, but more songbased. The recording of this album is just good, but not near perfect.

Alibi is a heavy opener with some nice melodic compositions, the warm vocal harmonies in the chorus make the song complete. Wintertime has a serious couplet and a happy refrain, a good expample of the crossover side of Kayak. Still some of the melodies in this song sound very devoted and work very well. Mountain Too Rough is one of the most beautifull Kayak songs. Very melodic, very symphonic. Thet get to Know me has a heavy beginning, a sort of mysterious/psychadelic couplet and a 5/4 ending section that also sound very progressive. The solo's on the end are nice. One of my favourite Kayak tracks. Seranades, Woe and Alas and Mireille are classic Kayak crossover/symphonic prog songs with a diversity of moods within the songs and catchy vocals by Werner. Trust In The Machine is most progressive song of the record with a space feel, great use of senthesizors and strange time signatures. The ending section is very worthwhile with it's nice solo's. His Master's Noise, though shorten then two minutes this a essential song of this album. Pure beauty non-stretched, reduced to it's essence. I love these kind of Kayak songs at the end of the albums that are often very short.

Conclusion. Only the perfect The Last Encore album of Kayak is a bit better, but this is one of the best Kayak albums. Symphonic proggers must have this, as well as people who like crossoverprog/songwriting.
Posted by Zen Archer at 1:25:00 AM