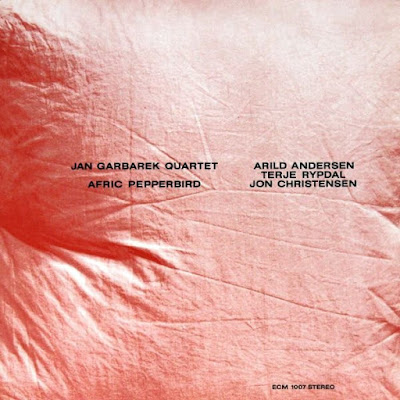 Even the most perfunctory ECM listeners will have encountered, if not participated in, the heavy criticism laid into the label’s apparently gossamer aesthetic. Despite the fact that ECM and its handful of brilliant engineers have been at the forefront of advancements in sound and postproduction for decades, all of that talent is dismissed by detractors. Enter Jan Garbarek, an adventurous musician if there ever was one. As one of ECM’s undisputed champions, Garbarek continues to come under great fire for his metamorphosis from muscular Norwegian free jazz giant to purveyor of saccharine “New Agey-ness.” Some blame old age, others an encroaching cowardice or laziness toward music-making, and in doing so show an utter disregard for the wide variety of projects Garbarek has continued to involve himself in over the years. Of course, I cannot be so hypocritical as to explain away the debate through claims of misinformed listenership. It may simply be a matter of preference. Still, I wonder where all this trolling stems from, the clear disrespect for a passionate musician and the sound he has spent decades honing to a craft. We bash Garbarek for “ruining” choral masterpieces in his fruitful collaborations with the Hilliard Ensemble (to say nothing of the latter’s willingness to continue working with him), yet seem to have no problem hearing a snippet of Mozart or Vivaldi being used to sell or raise the prestige of a product that didn’t even exist until centuries later. I will go out on a limb here and opine that behind the blatant disinterest in this lone man’s playing is a fear of coming face to face with musical honesty. Garbarek makes no compunctions about his melodies, lays them out on the table freshly dissected, and in an era bent on fleshing out often paltry musical skeletons with overcompensating effects, perhaps his stripped-down stylistics appear to fall flat. This isn’t to say that ECM doesn’t put its own fingerprint on every release at the mixing board, but to me these augmentations stem directly from the heart of the music being recorded rather than force the music into a box it never inhabited to begin with. For Garbarek, this often means a spacious wash of reverb, whereas for an artist like Dave Holland it means a rawer sense of immediacy.

Like any artist, Garbarek has changed with time and, yes, with age, but already in Afric Pepperbird, his first album for ECM and one that would instigate an unbreakable association with the label, he invites us into a world that is at once playful and mature. Half of the album is made up of miniatures, “Skarabée” and “Mah-Jong” being the most precise and delicate among them, laced as they are with Christensen’s distinctive cymbal work and overall compositional sensibility; “MYB” and “Concentus” are simply gorgeous asides and drop like seeds into the album’s already fertile soil. Andersen’s steady bass line assures us the title track can swing with confidence, pouring on the Saharan charm like fresh honey, while “Blow Away Zone” features an adventurous Rypdal and an ether-wrenching solo from Garbarek, who squeezes his way through an opaque tornado of bass and drums. Clocking in at twelve-and-a-half minutes is “Beast Of Kommodo,” a patient and rewarding romp of gargantuan proportions. Garbarek gives his all for this one, mixing saxophonic roars with fluted reveries with equal conviction. The set bows out with “Blupp,” a smile-inducing froth of percussion and vocals that doesn’t so much describe its title as demonstrate it.

This may very well be, along with Witchi-Tai-To, the quintessential Garbarek album for those who normally don’t care for his style. Whatever your taste in jazz, whatever your opinion on Garbarek and the label he calls home, this is a spirited and robust effort worthy of your attention.

And a happy weekend for the people that requested this one!