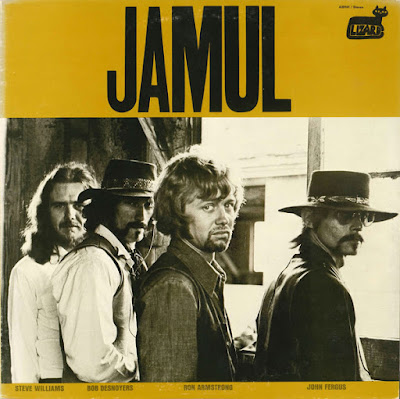 
The album, though being issued on the small Lizard label, may be not so obscure, but the band surely is. Named after a small town somewhere out in the back country near San Diego, there is almost no information available on this outfit. They are: Steve Williams, Bob Desnoyers, Ron Armstrong and John Fergus. Their music is mostly heavy blues rock with extremely powerful vocals. Best songs are "Tobacco Road" with a strong guitar solo and thundering blues harp, "Ramblin Man" (not the Allman Brothers' song) and the apocalyptic "Valley Thunder". Their cover of the Rolling Stones' "Jumpin' Jack Flash' is a bit lame, although it has a good progressive Guitar solo. There are 2 or 3 other songs, that seem to be mere fillers. But still - this is better than some of the 100-dollar-records you see for sale. - Originally came with a set of stamps depicting the musicians. seifke
Killer late '60s US heavy hippy rock album issued in 1970 with a down-and-wasted vibe. Great guitar throughout with a superb version of "Tobacco Road", plus loads of originals. The band were involved with Steppenwolf's management and the sound is similar to the early years of that band as well as other heavy acid rock bands such as Yesterday's Children and Frantic. Great album and worth checking out.


So rather than speculating about the band's roots, I stumbled across drummer Ron Armstrong's website which included some material on Jamul.  Here's what he had to say about the group:

"In 1970 I joined a new powerful roots rock band, Jamul, on drums and singing, which was led by San Diego based guitarist/lead singer, Bob Desnoyers. Bob inspired me into writing songs for which I’ll always be grateful. (Bob has since passed away) Sunrise Over Jamul and Movin’ To The Country got some airplay, but Bob’s killer version of John Loudermilk’s Tobacco Road got the most. On bass we had John Fergus, playing a punchy groove style that was easy to lock into.  John also wrote a song I loved, Nickel Thimble.  Later we were fortunate to add a great harmonica player/singer Steve Williams, making our trio now a solid 4-piece unit. We did very well packing the clubs and ended up making an album produced by Richard Podolor with Gabriel Mekler as executive producer. (Same team who produced Steppenwolf & 3 Dog Night) Jamul, title of band and album, was named after a small town East of San Diego. It got national attention reaching # 93 nationally, as listed in Billboard magazine.

I was fortunate to have included 4 songs I wrote for the album.  One of them, Sunrise Over Jamul, was named “newcomer pick of the week” in Cashbox magazine.  Another song included was a funky cover of Little Richard’s; Long Tall Sally. After Richard heard us playing it at the Whisky A Go Go in Hollywood, CA., he asked for us to back him performing his first music video in Washington DC. This became part of Barry Richards TV Production, DVD now available. Besides Little Richard, backed by Jamul, it featured many top acts like Alice Cooper, Bob Seger System, Humble Pie, Fats Domino, Muddy Waters, The Byrds, etc."

Having played around the San Diego club scene (National City's Club Pleasure), the band apparently caught a break when Gary Puckett (of The Union Gap), caught one of their shows.  The resulting attention led to a contract with Gabriel Mekler's Ampex-affiliated Lizard label.   Produced by Richard Podolor (Melker serving as executive producer), 1970's "Jamul" offered up a mixture of then-popular covers and band originals.   Powered by Steve Williams' powerful, growl of a voice, the band offered up a raw, rough, and occasionally ragged mix of bar band and blues-rock that's always reminded me at least a little bit of Steppenwolf (who were frequently produced by Podolor and Mekler).  That comparison certainly seems apt on tracks like the leadoff single 'Sunrise Over Jamul', 'All You Have Left Is Me' and 'Valley Thunder'.  Was it the most original album you've ever come across ?  Certainly not and according to some of the folks who heard the band live, they studio set comes off flat compared to their live repertoire.  Still, the set has more than a couple of impressive moments including the lysergic-tinged 'Nickel Thimble' and two blues-rockers 'Ramblin' Ma' and 'Valley Thunder'.
Posted by Zen Archer at 4:52:00 PM