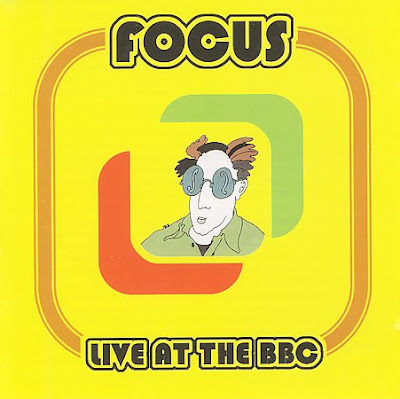 
If this album is purchased without the expectation that it's going to contain any of the wonderful baroque 'n' roll that Focus produced on their first 4 studio albums then you're in for a treat. Fans of Brand X, UK and the funkier jazz-rock fusion of the seventies should get something out of this anomaly for sure. Ironically, the two earlier Focus classics featured here sound the most out of place on this hour long live set. There's not even a hint of a guitar solo on the compulsory Hocus Pocus which concludes the performance and is played at such a fast tempo that it gives the impression that the band had a plane to catch.

After the shock departure by guitar maestro Jan Akkerman on the eve of a tour of the UK in early '76 the band had to scramble to find a new guitarist. Fortunately they managed to find someone who could match and in some ways surpass Akkerman. For those who were around in 1976 it was becoming evident that there were a lot of changes taking places with progressive rock bands by mid-decade and even Focus' previous 1975 album Mother Focus reflected a move towards more streamlined shorter compositions. Fortunately, instead of continuing on with the simplification route that so many prog rock ''dinosaurs" were taking, Focus decided to re-invent themselves ( partially out of necessity ) and recruited a guitarist with a technical background who could maintain some sophistication in their music as well as breathing some new air into their sound if they were going to survive the uncertainty that confronted them at the time. In his mid 30s, Philip Catherine was no novice and was already was dabbling in electric jazz having just previously released a fusion album with Americans John Lee & Jerry Brown as well as more traditional material with Stephane Grappelli and Jean-Luc Ponty.

Just as keyboardist / flutist / vocalist / leader Thijs van Leer had brought out the sterling qualities in guitarst Jan Akkerman with his compositional prowess and musical insight, he did the same here with Catherine who makes no attempts to emanate Akkerman with the only real memory of Akkerman being an early Focus single, House Of The King written by him which dates back to 1969. And this is what really saves Focus from becoming a monumental catastrophe, literally re-focussing by replacing the old guitar genius with a new guitar genius. Although it was a hurried thing ( a testament to all 4 individual musicians' versatality ) it worked out and not only did Catherine contribute his own material ( 5 tracks here don't even appear on any Focus album ) Van Leer throws in a reworked Bach sonata that recaptures a bit of the earlier years and serves as a buffer track, releasing the tensions that were beginning to build just prior to Akkerman's departure et viola a fresh sound.

Almost certainly because of contractual obligations the Focus name had to be retained, so fans at the time had to either accept the change in style or consider them in an entirely new light. Because this is a posthumous release that first appeared on CD in 1996 it can be considered on it's own merits along with a number of ''what ifs". As I mentioned before this is as good as any of the quality fusion jazz being released at the time with a tendency to sound more British than American ( Catherine was half British half Belgian ). Remember one must also to take into account the lack of preparation time ( a matter of a couple of weeks) for the band to make a drastic transformation in style and concept. What has to also be stressed that it is nothing like the atrocious forthcoming Focus Con Proby featuring the out of place vocals of American R&B singer PJ Proby ( what was Van Leer thinking? ) which put Focus into stasis for the next quarter of a century save for a reunion concert in 1990. Apart from wordless vocals, yoedeling on Hocus Pocus and scat style accompaniments on the opening Virtuous Woman, Live at the BBC is devoid of any conventional vocals. Two instrumental tracks from Focus Con Proby composed by Catherine ( Sneezing Bull & Angel Wings ) are featured here as well, the latter recalling some Mahavishnu sensibilities.

Exceptional musicianship displayed by a re-focussed Focus that in retrospect demystifies a lot about the band during the lost years in between Mother Focus and Focus Con Proby. Essential for any admirers of the present Focus and for those who are still wondering what happened just after Jan Akkerman quit the band so suddenly in early '76. Not to be written off.
Posted by Zen Archer at 1:24:00 AM