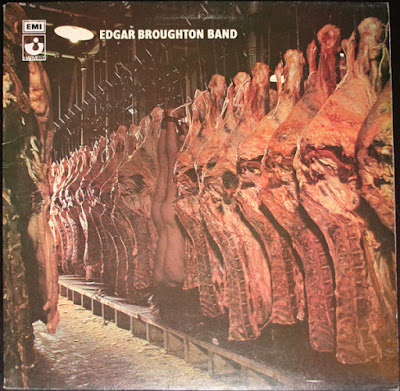 The most conventional of the Edgar Broughton Band's first (and best) three albums, 1971's Edgar Broughton Band finds the group dispensing with the no-holds-barred mania and theatricality responsible for such classics as "Out Demons Out," "Up Yours," and "Apache Drop Out" and concentrating instead on more musical endeavors. It's an approach that arguably captures the band at their very best at the same time as revealing them at their ugliest. The two-part epic "For Dr. Spock" conjures images of Gong, as it drifts closer to space rock than the Edgar Broughton Band had hitherto ventured, while "House of Turnabout" certainly restates the group's free-freak credentials with its rumbling percussion and scything guitars, a second cousin to the roars that punctuated Wasa Wasa and Sing Brother Sing. The heart of Edgar Broughton Band, however, lies elsewhere. The lilting chant "Thinking About You," with its spectral reminders of John Lennon's "Working Class Hero," is certainly one of their most rancorous concoctions, while "Evening Over Rooftops" rides an acoustic guitar as pretty as its flowery lyric, but you know there's something rotten squirming just below the surface, even if you can never quite put your finger on it. The pure pop backing vocals, all "sha-la-la" and "doo-be-doo-be-doo," of course, only add to your unease. And, as that is merely the opening number, you can guess what you're in for over the rest of the album long before you actually get it.