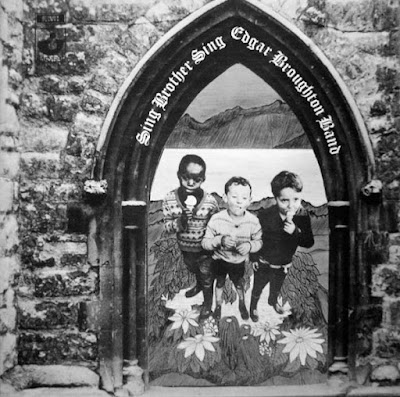 Yuri Grishin's book on the Harvest label states that the A3/B3 matrix ending edition is the first pressing.


Sing Brother Sing almost equals the psychedelic cohesiveness and insouciant air of the Edgar Broughton Band's debut album, but, even without doing so, it still stands as their second strongest release. All the songs on Sing Brother Sing wallow in a hippie-ish, kick-backed experimental blues-rock style, extenuated to perfection by Broughton's resonant grumble and vocal staunchness, and surrounded by chem lab mixtures of guitar and bass. The group's peculiar instrumental outputs give odd tracks such as "There's No Vibrations but Wait," "Momma's Reward," and the two parts of "Psychopath" progressive rock-type tendencies with a homemade wit, which would be the band's most daunting characteristic outside of Edgar Broughton's singing. Although the Captain Beefheart and Frank Zappa comparisons are unavoidable, the rest of Sing Brother Sing's facets and odd instrumental avenues emit a distinctness that remains the whole album through. The quaint but humorous English air that encircles "Officer Dan" and "Old Gopher" reflects Broughton's adept satirical approach, maybe without him even knowing it. Held together with elements of jazz, rock, and blues, the music on Sing Brother Sing is captivating because of its raw integrity, and in its refusal to adhere to structure, formula, or to travel a beaten path.