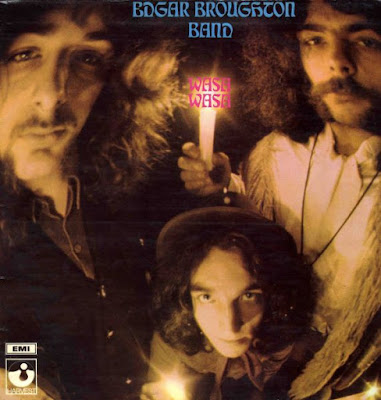 
So, what do you get if you cross 1969-70-era Stooges with the raw mutant blues of early Captain Beefheart? Pure satisfaction, in the form of this, the first LP by the Edgar Broughton Band. I was first drawn to investigate these guys in my youth after reading about them in the book ‘Space Daze’ by Dave Thompson, which was released in 1994 to accompany the 2-CD Cleopatra compilation of the same name. The live staple ‘Out Demons Out’ from Glastonbury 1972 was cited as an example of populist space rock, something that I can’t agree with having now heard their albums and rarities [some of ‘Oora’ from 1973 comes a bit closer to space rock], but after finding a copy of the first LP on secondhand vinyl a few months later I fell in love with the band all the same. The combination of Stooges-meets-Beefheart primal, tortured acidic rock with uncommercial, people’s band street cred and big mo’s was an instant attraction.
I assume those reading this will have some awareness of who the Edgar Broughton Band were and the proto-crusty Ladbroke Grove environs they blossomed in, so I’ll skip any attempt at biography – that’s already done elsewhere, including in the informative CD reissue liner notes – and get straight on with a look at the music.

‘Death of an Electric Citizen’ begins the album with a few tentative notes before kicking into full slaughter-fuzz, reducing a blues stomp to its most basic elements, and grinding it into the underworld with tortured, snarling guitar, thudding sub-Geezer Butler bass manipulations and loose drum splatter, with Edgar as the preacher of doom. ‘American Boy Soldier’ is a viciously anti-war song, starting with the recruitment of a hopeless, aimless young man with the enticement to kill, before becoming a sick doo-wop ballad that sings of the grievously wounded aftermath in mock light-hearted humour. ‘Why Can’t Somebody Love Me?’ takes us back to tortured guitar grind, embodying the wailing, black-skied grief that flows through the whole record, essentially the one repeated riff descending into the pit while Edgar’s voice tears your soul apart and breaks your heart with this hard rocking ship of woe. ‘Neptune’ continues the gloom with a spacier, floating progressive psychedelic blues vibe and heavily phased cymbals; if it weren’t for Edgar’s distinctive Beefheartian wail, this could almost be an early Earth/Black Sabbath out-take.
‘Evil’ picks up the pace again and invites some spirits to whirl around the ceiling, with a driving basic riff sounding almost like a rootsier take on riff piledrivers like ‘TV Eye’ haunted by Screamin’ Jay Hawkins on an STP overdose. ‘Crying’ continues to bring the mantric angst, whilst ‘Love in the Rain’ does the same, but with some glimmer of hope and inner strength now ripping through the existential mania with triumphantly damaged riffing and splinters of feedback, finishing with Edgar exclaiming “that was soo good!” and panting with exhaustion.
‘Dawn Crept Away’ closes the album and is by far the longest track, the kind of extended oddity that less kind and more conventional reviewers would deem a ‘failed experiment’. Going through numerous distinct sections, I still struggle to work out how it all relates even after all these years of listening to it. The first section is a snippet of pub conversation, two guys observing another guy trying to pick up a woman, and wondering to themselves where they’ll be in the morning. This soon kicks into a typical repeated Broughton riff with Edgar’s weird-ass voice singing about a young boy and his mother, asking her about the red ball in the sky and lamenting a lack of answers, before spreading out and swinging between almost free-form sections and ‘the riff’. As is typical for the whole album, the song is infused with a deep feeling of dread, emotional pain, confusion, searching and clutching at some salvation. Coupled with Edgar’s lyrics and their lethal delivery, you’re almost left wanting to blow your brains out without exactly knowing why, but I guess the strength of this album is that such a feeling ends up as redemptive rather than suicidal, because it deals with real gut emotion but strives towards a life worth living.
(The real closer is a short vocal track, which if explained or described here would basically give it away, so I’ll leave that for you to discover.)

After this LP, the Edgar Broughton Band continued for a few years and released more albums, but I still look to ‘Wasa Wasa’ as the best of the lot. Later albums were certainly more musically and compositionally skilled, in conventional rock terms, as well as having more musical variety, but they don’t come close to this for sheer raw impact and savagery. The most consistent LP of the others is probably the follow-up, ‘Sing Brother Sing’.
There’s a great CD reissue of this album from 2004 on EMI that contains Edgar Broughton Blues Band demos from late 1965/66 [‘Messin’ With the Kid’, ‘Waterloo Man’, ‘Jacqueline’, ‘Tellin’ Everybody’], which are pretty standard blues rock as played by a band just starting to learn to play, as well as ‘Untitled Freak Out’ recorded at Abbey Road, 21 Jan 1969 [an acidic free-rock jam that goes for nearly 10 minutes].