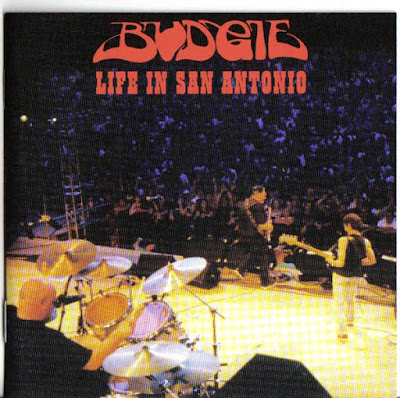 Cardiff heavy metal titans BUDGIE return with a barnstorming new album after a hiatus of some two decades.
Spaceman bassman Burke Shelley & co despatch a frenetic, energetically well paced greatest hits set to a crazed crowd of rabid Texan fruitcakes!
This atmospheric in concert CD is a good representation of what to expect at a BUDGIE live show - dynamic, explosive heavy metal, delivered with punch - but also with a keen sense of humour.
The album also acts as a nice memento of the all-too-brief period in 2002 when Andy Hart wielded the axe. The former Joe Brown & the Bruvvers (whaaat?) guitarist churns out killer riffs n'tasty frills & fills with minimal fuss and zero pomposity throughout.
Walloping walrus drummer Steve Williams has been underrated for waaay too long - check out his performance here - the sheer stamina and power exherted on those skins! Mercy!
Neckache is most certainly guaranteed, pop pickers, particularly on early classics such as Napoleon, Breadfan, Melt The Ice Away and the teasing medley of In For The Kill/Rape Of The Locks and Guts.
Amazingly heavy stuff ... and original, too.
So if ever you've wondered where the likes of Metallica, Iron Maiden and Soundgarden got their chops, check out this disc - it's a seventy-odd minute lesson in the art of the dispensation of apocalyptic heavy metal.
And don't forget - this spellbinding power trio (now joined by Simon Lees on lead guitar) are still out there rockin' and need your support out on the road!
See you down the front ...