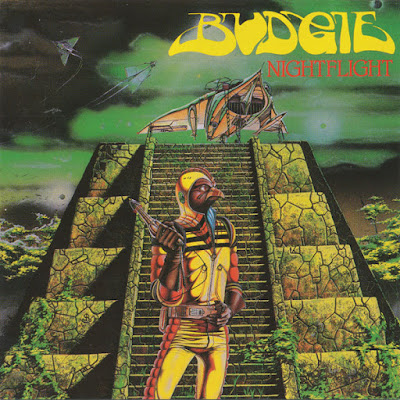 
Flying in on the wind of change in 1981 along with the NWOBHM they made a huge impact with this album Nightflight and rightly so - it is one of the classic albums of the 80's for its breathtaking musicality and prescence - and it really rocks! Listening to the album today the album is exciting, rich, packs plenty of punch and the sound quality is pristine - the album is long overdue for reissue on remastered CD, though vinyl copies can still be found easily.

The songs are all gems, even though my judgement is coloured as the memories from an extremely turbulent but exciting period of my life returns...the first track on side one Turn To Stone is especially guilty of this, the opening arpeggio guitar notes are guaranteed to make you tingle as they waft out of the speakers, building into killer riffs, crashing drums and an infectious melody, powered with galloping bursts of crashing cymbals supporting melancholy, but uplifting lyrics. The song fades off then ends in a reprise featuring solid drums from Steve Williams and a great hammer-on guitar solo, classic playing from John Thomas.

Keeping a Rendezvous has a regular stomping beat and features another great guitar solo, this excellent song was unsurprisingly issued as a single. Another very solid performance on Reaper and the Glory, an infectious shuffle beat drives this song, vocals and bass from Burke Shelley are consistent and powerful, classic rock!

Side two kicks off with the boogie style Don't Lay Down and Die, followed by another album highlight Apparatus which was released as the B side of the Rendezvous single, another very good song which starts with a ballad style arpeggio which breaks into a moderately paced rocker with some powerful drumming. The faster paced Superstar has a very infectious riff driven along with a stomping beat, the vocals fitting in with slightly offbeat timing which works perfectly.

Change Your Ways follows the clean stomping style of the album but could possibly be the weakest song on the album if you could find one, but contains some nice slide work on the guitar. Untitled Lullaby, a short instrumental piece, rounds the proceedings off in atmospheric style, with sweeping winds and metallic sounding acoustic guitar - shame the track is so short when you are expecting an epic finish but overall an excellent rock album, unfortunately one which seems to remain an almost forgotten classic.