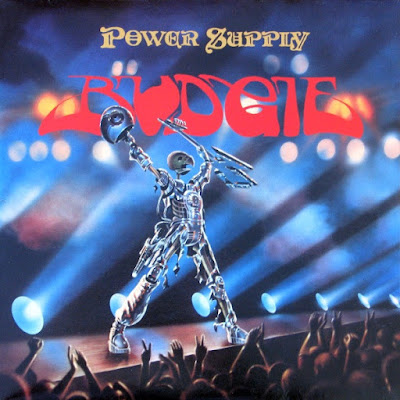 With 1980's heavy metal onslaught Power Supply, Budgie stamp their authority on the new, expansive, highly competitive heavy metal scene of the early to mid eighties in an riveting and exciting way that left a lot of those other bands eating their dust. This album is just about the heaviest the band would ever produce, and leaves no doubt to the listener that this band just wouldn't die, and could still hang tough and create music that still mattered.
From the opening chords of Forearm Smash to the end of Crime Against The World, for me, this record gets to the heart of what made metal something not to be ignored, and must have been great music to hear live, like maybe at Budgie's first headlining gig at the 1980 Reading Festival, where they went down fantastically, and were supporting Power Supply at the time.

At the time of Power Supply's release, as an adolescent living in Cuba, i had no way of getting to Reading, but this album has such an almost live sounding freshness and excitement to it, well, it is like being there, really. Alas, things were to change with their subsequent two studio albums, both good efforts, but not quite Power Supply. Well, what really was?

If you are looking for more progressive leanings, try elsewhere, like Impeckable or If I We're Britannia, I'd Waive The Rules, but if you want something heavy and in your face, but refreshingly positive in the same breath, this record is for you.
Posted by Zen Archer at 1:01:00 AM