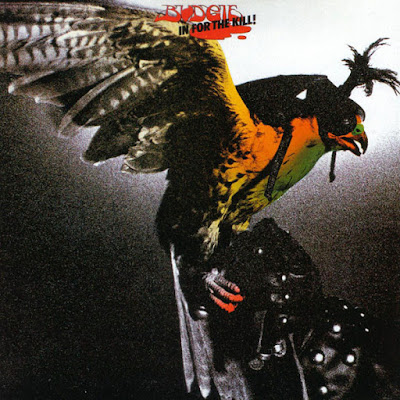 Budgie have a special place in the heart for many fans of heavy rock in the seventies but they never really reached the heights of many of their contemporaries at the time. Like Led Zeppelin, Budgie knew the importance of having light and shade in their music; lighter, sometimes acoustic moments to complement the bombast on heavier riffs making the music much more dynamic. While their music did contain quite a few twists and turns at times, in the main the heavier moments were built around solid repetitive riffs.
In For The Kill was the fourth album from the band and whilst not being their best it does contain some fine moments. None more so than the opening and title track itself which has a heavy and insistent unison bass and guitar riff so favoured by myriads of metal bands to come. The track rocks along with a steady groove with Burke Shelley's high pitched vocals over the top, changing tack to a slower pace for a mid section including a fine bluesy Tony Bourge guitar solo.

Crash Course in Brain Surgery in no doubt well known to most Metallica fans, being covered by them on their $5.98 EP back in the eighties. In truth it's a fairly dispensable and mundane heavy rocker with little to get excited about. Wondering What Everyone Knows is the band in acoustic mode, pleasant enough but fairly average nevertheless.

Much better is Zoom Club, at almost 10 minutes a bit of a mini epic. It has a great riff and generally features some fine guitar work from the underrated Bourge where he's really let off the leash and includes a strong and lengthy solo.

While nothing on side 2 of the original vinyl album can match up to In For The Kill and Zoom Club it's still pretty good. Hammer and Tongs is built around a bluesy Black Sabbath style riff. Running From My Soul is a short and simple boogie based song. Living On Your Own is another longer track and a fine album closer. Heavy riffs alongside gently picked guitars, Shelley turns in a fine vocal performance and Bourge is given free reign to solo at will including some slide guitar.

So all in all, a good competent slice of seventies heavy rock. If you're new to the band though I'd recommend starting with their classic Never Turn Your Back On A Friend album.
Posted by Zen Archer at 9:02:00 PM