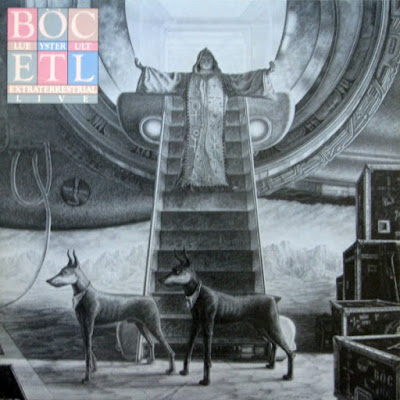 In chronological order the songs were recorded at:


Okay, so maybe Blue Öyster Cult do need that many live albums out, if only to demonstrate how far they had evolved as a touring act over the decade — just as far, actually, as they'd evolved as a studio band, from once having been a tough, experimental, tightly focused meta-hard-rock act to now realising the wet dreams of Spinal Tap fanbase right there on the stage. On Extraterres­trial Live, it's «rock and roll burlesque» all the way.

Not that I really mind. By 1982, the band was so grotesquely over the top that only the most hateful listener, or the most naïve listener, could suspect them of being serious in their approach. The whole concert was basically one big circus show — so that founding member Albert Bouchard, who was either kicked out or left inimicably halfway through the tour, should have been glad to be deprived of the dubious honor of participating in this debacle. And yet, there is something delightfully silly about how they re-deconstruct their already deconstructed material and poke irreverent fun at themselves, their music, the audience, and the «rock mentality» even as they give out the superficial impression of embracing it.

Invocations to the great power of rock and roll start immediately, right from the hysterical "one two three four!" that opens ?Dominance And Submission'. Then, taking over from the departed Bouchard on vocals, Eric Bloom gleefully salivates over the words "rock and roll" in ?Cities On Flame' — and then there's simply no stopping the band, particularly on ?Godzilla' and an extended cover of the Doors' ?Roadhouse Blues', which they try to turn from a mere «epic» track into a multi-mega-arch-epic powerhouse-of-a-track, adding extra repetitions of the "let it roll" section and a lengthy monolog on the details of the process of waking up and getting myself a beer. Meanwhile, ?Godzilla', complete with a spoken warning about the nuclear peril, finally de-cloaks itself as a contemporary update of ?Wild Thing', but hip enough to quote ?Milk Cow Blues' in the instrumental section. In short, it's all a madhouse.

There is one serious reason to own this record, though: Buck Dharma. You could always count on that guy to save the band out of a tight spot, and on this record, he seems like the only member who can still remember what a proper straight face looks like. His playing throughout is awesome, but nowhere more so than on the lengthy solo in the middle of ?Veteran Of The Psychic Wars': with little warning, they suddenly pick up the tempo and let Mr. Roeser explode in a super-fast, flashy passage that is totally overflowing with passion and ecstasy — unquestionably one of the best ever guitar solos captured on a live album, period. Even though he did not write the original song, he must have sensed its potential — that, despite its Moorcock origins, it was really that one sci-fi tune in the band's catalog that could have a universal application, Cold War and Viet­nam associations included — and he gave it his due.

In addition, just like their preceding two live offerings, Extraterrestrial Live also serves as a marking time album, closing the door on the «third age» of Blue Öyster Cult — the band as sea­soned veteran cosmic rockers with a penchant for campy excess and arena-oriented bombast, towards which they re-orient even their older material. Little did anybody suspect to what sort of depths this band would soon plummet, even if in retrospect, it does look fairly predictable that 1981-1982 would just have to be the last years where good taste and common sense could at least occasionally prevail over market demands, or at least go hand-in-hand with them. In memory of that, let us conclude the review with a big fat thumbs up («big fat» being a reference to the overall sound of the record, not the emphatic nature of the thumbs up in question).
Posted by Zen Archer at 6:32:00 PM