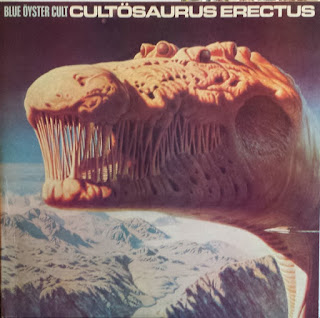 
Kind of a confused record, but not without some major points of interest. As the disco backlash hit the streets, Bloom and Co. must have realised that they'd wandered a bit too far off in the back alleys — even if songs like ?Dr. Music' and ?Lonely Teardrops' were not without their merits, hearing them in 1980 might make the fans feel as if they'd just caught the band with their pants off or something. Quickly, the boys devised Salvation Plan B — drop all the vaudeville and get realigned back to heaviness. For extra security, they teamed up with famous hard rock producer Martin Birch, fresh off work on Heaven And Hell, the new album by the new-look Black Sab­bath (with Dio) — and once Birch helped them get out their own record, they even went on tour with Sabbath together (an old video, still officially unavailable on DVD, predictably called Black And Blue, actually captured that glorious moment).

Getting back some of that heaviness was a good thing, and, in fact, what with all the advances in technology and all, Cultösaurus occasionally sounds thicker and denser than anything they ever did before (Birch certainly saturates some fat inside Joe Bouchard's bass, for one thing) — but don't let that fool you: this is not an improvement on the first three albums, and, in fact, I'd rather we did not compare them at all, because the poor skeletal beast will not survive the procedure.

With just a couple exceptions that I will save up for a little later, Blue Öyster Cult have finally entered what is commonly referred to as «Spinal Tap territory». The typical song here is a big, bombastic, superhero-style light metal rocker — sometimes equipped with its own riff, but more often not (I'm still trying to locate one in ?Black Blade', but to no avail: most of the time it is the bass that drives the song rather than the rhythm guitar). The first songs start us off in sci-fi / B-movie mode, but as the album progresses, the band moves on to the subject of «Rock And Roll Hero», dedicating song after song to issues of superstardom, rebellion, and fall from grace — and much of this stuff just sounds like parody (sometimes rather pedestrian parody) on rock'n'roll aesthetics. Not deconstruction of rock'n'roll aesthetics, as it used to be in the glory days, more like relatively simplistic parody.

The «epic» number that opens the album is ?Black Blade', another collaboration with Moorcock on one of his fantasy subjects (the «soul-sucking» sword of Elric) — but, unlike ?Sun Jester', this one has no emotional subtlety whatsoever, and even though its fat chords, Neanderthal vocals, and scree­ching guitar leads do a good job visualising images of Boris Vallejo characters, the melody is not particularly memorable, and the song is neither awesomely impressive nor awesomely funny, so I am not exactly sure what to do with it. ?Monsters' is much more interes­ting, melody-wise, especially the way it manages to combine jazz with hard-rock (the mid-section reveals direct influences of King Crimson's ?21st Century Schizoid Man'), but... it doesn't sound much like «monsters». More like a passable jazz-fusion piece integrated with some generic hard rock passages. No visions springing up.

The second side is dominated by the shadow of ?The Marshall Plan', a bombastic saga of a proverbial rock'n'roll hero, peppered with lyrical references to Don Kirshner, quotations of the ?Smoke On The Water' riff, fake audience noises, and endless namecalling of a certain «Johnny» — good thing the album was released a good half-year before the Lennon shooting. As a glam-rock theat­rical piece, it's okay, I guess, but not particularly necessary after we've had ourselves that lengthy Alice Cooper streak of early 1970s albums, much more powerful on the whole. Again, musically it is the shorter songs that have more pull. ?Hungry Boys' is a rare case of a New Wave-influenced pop-rocker here, with electronic effects and slightly robotized vocals that contrast with fully traditional rock and roll guitar leads; and ?Lips In The Hills' is a good showcase for the boys' guitar interplay — nasty swirling arpeggios overlayed with stinging solos, fully redeeming the song for Meltzer's whacko lyrics.

But all of this is merely «decent». The only moments where the album approaches an oasis of greatness are, interestingly enough, ?Divine Wind' and ?Deadline' — two songs credited solely to Buck Dharma, indicating that, at this particular time, he was the most reasonable of the band members. ?Divine Wind' is melodically unexceptional — a fairly standard blues-rocker — but, alone of 'em all, it actually sounds serious: Buck's chorus — "if he really thinks we're the devil, then let's send him to HELL!", with heavy threatening emphasis on the last word — occasionally sends a shiver down my spine. Apparently, never mind the actual title, but the song was referring to the Ayatollah and the Iran crisis, and in these politically sensitive days would probably count as warmongering and maybe cost Blue Öyster Cult their place in respectable society and align them next to Ted Nugent, but things were kinda easier in 1980, and besides, regardless of deeper causes, the Ayatollah was one rather sick son of a bitch, so I can empathize. Most ardently, though, I empathize the howling guitar breaks and the doom-laden basslines.

?Deadline', one of the record's lighter tracks, memorizes an incident in which one of the band's booking agents was shot by a guy from whom he wanted to wrestle out a gambling debt — and the memorial is well held, with a chorus that somehow implies that being resolute and determined is not always a good thing ("he missed the deadline / he passed the deadline, darling"), and some moody, echoey guitar leads for atmosphere. Lighter it may be, but ultimately it cuts deeper than anything else on here, and I'd certainly return to the album in the future for ?Deadline' rather than ?Black Blade' or ?The Marshall Plan'.

Unquestionably a thumbs up here, because even the «bad» songs are so obviously tongue-in-cheek that only an idiot could get offended. But I would be lying if I said the album didn't have its problems — the major one being a noticeable disappearance of good rhythm guitar. You can't live on solid Buck Dharma solos for eternity, and the riffs did provide a reliable foundation for the BÖC legend in the past. Taking them out and substituting «theatrical pomp» in their place, hoping that we do not notice, is a bad move, and one that would eventually lead to their downfall. Fortunately, here we are still some way away from it.