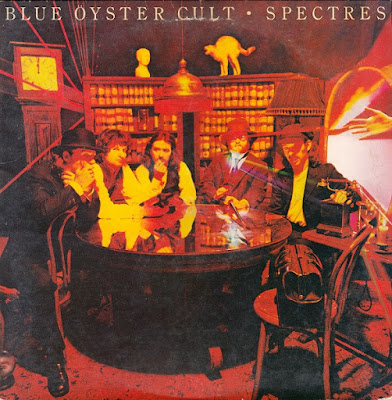 
This is actually a very good album, but I see how it can be (and is) often viewed as a major dis­appointment, coming right off the heels of Agents Of Fortune. First of all, its lead-off track and best known song, ?Godzilla', is a straightforward novelty number — never yet had Blue Öyster Cult sounded as close to «parody» as on this song, whose thick, grumbly, but ultimately humo­rous riffs sort of mockingly imitate the tread of Japan's beloved monster, and whose braggard chorus announces ?Godzilla!' as if it were a bunch of male cheerleaders welcoming the world's latest heavyweight champion, stepping out of his limousine on the red carpet. Ironically, both of the band's biggest successes of the 1976-78 period are credited to Buck Dharma — but ?Godzilla' couldn't be more different from ?Reaper', and any fan who had previously admired ?Reaper' for subtlety and depth would only find crudeness and silliness in ?Godzilla'. Which, however, does not make the song any less catchy or fun.

The rest of the album, however, remembers that the band's chief strength lies in putting meanings on top of other meanings, and not only in choosing bizarre subjects for their songs, but also in finding bizarre structures and sequences to present them in — and from that point of view, Spectres is still classic Blue Öyster Cult in very good form. If there is an overall complaint, it is that the record all but says goodbye to the pop vibe of Agents Of Fortune, but does not return to the lean, crunchy hard rock of earlier times. Instead, the band is now regularly going for an «arena» type of sound — taking its cues from Boston and Foreigner rather than Black Sabbath, with power chords, glossy, «clean» guitar melodies, lots of keyboards, and a rather grayish production tone plaguing good and bad songs alike.

Something like this could, of course, be guessed just by looking at one of the titles: ?R. U. Ready To Rock' — amusingly, the song was recorded around the same time as Queen's ?We Will Rock You', and this is telling, considering that News Of The World was also the most «arena-rock» type release that Queen ever offered its audiences. Except that ?We Will Rock You', as cheaply populist as it was, at least fulfilled its promise, whereas the BÖC song, slow, meandering, and with a lazy riff, only shows that, while you may be ready to rock, the band has pretty much for­gotten how to do that effectively, even in a post-modernist manner.

Fortunately, the meat of the record lies not in its unconvincing appeals to rock'n'roll, but in some of its imaginative mini-world journeys. ?Golden Age Of Leather' is an ironic, multi-part saga about bikers — from folk chant to ballad to James Bond theme to catchy pop-rock (later to turn into ?Demolition Man' by The Police), the tune has it all. Albert Bouchard's ?Fireworks' is a mystical story of romance and tragedy, one of those songs where the verse melody hits harder than the chorus (I love those rapidly descending "she, went, down, to-her-house, by-the-water..." sequences and the moody guitar lines that echo them, creating a sense of doom in a highly un­conventional manner). And the band's obsession with the occult/supernatural culminates in not one, but two songs about vampires closing out the album — ?I Love The Night' approaches the subject from a sentimental-romantic angle, while ?Nosferatu' is essentially a brief retelling of Bram Stoker's Dracula, done in properly Gothic fashion (echoey vocals, doom-laden pianos and Mellotrons, stately descending harmonies, whatever).

Synthesizers and thick, bulgy, arena-rock pop-metal riffs populate many of these songs, and do not always make up for fascinating listening, but the songs can grow on you over time, with hooks and meanings slowly arising from the somewhat murky turf: even something as dumb as ?Searchin' For Celine', one of the band's rare excursions into funk-pop, eventually makes its point as one of those obsessive, stalker-type songs, whose relentless exploitation of a single chord (or a couple of them) intentionally sets up a paranoid atmosphere. In the end, the only song to which I could not warm up was ?Death Valley Nights', a total musical disaster that rests on nothing but simplistic «bashing» power chords, and cannot be distinguished from a million billion overloud arena rockers en vogue at the time. On the other hand, ?Goin' Through The Motions', which would later be even covered by Bonnie Tyler, is a good example of harnessing that production style by choosing an upbeat tempo, a catchy pop hook, a Farfisa organ (I think), and church bells to compensate for all the «gray». In the end, one or two bad songs aside, Spectres is nowhere near the awful letdown as it is sometimes proclaimed by those who actually fear the reaper, and deserves its stable thumbs up.