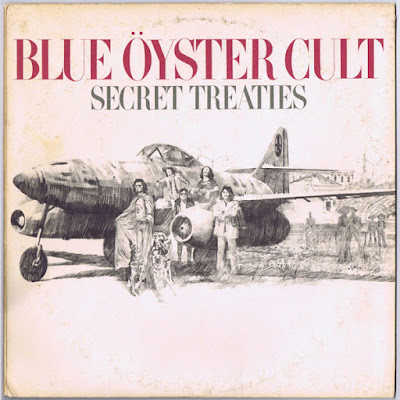 Each of these early BÖC albums has its own separate identity, but it is hard to delineate them without resorting to technicalities. If the appropriate keyword combination for the self-titled debut was «ironic mystique» and then Tyranny And Mutation replaced it with «in-yer-face ironic hard rock», well, I'd say Secret Treaties is neither of these things. It is noticeably lighter — still technically «hard rock», but with a stronger nod to pop and, most interestingly, with a certain minimalistic flavor: the riffs are getting more sparse, abrupt, and laconic, occasionally predicting the highly expressive minimalism of AC/DC or even the punkers. Listen to ?Domi­nance And Submission' and tell me you don't recognize ?We're A Happy Family' (incidentally, the Ramones were one of the opening acts for BÖC in early 1977, and the song was on the setlist — how's that for a little detective work?).

As such, I don't know about enjoyability, but they do manage to throw on some extra intrigue after the slight relative disappointment of Tyranny. By calming down a bit and concentrating seriously on musical development and lyrical content, the band produces a «hard-art» record that actually taps into some serious matter — not «proverbially dark» or «theatrically eerie», but snappy in a genuinely disturbing way if you pay sufficient attention. Nowhere more so than on the album opener, ?Career Of Evil', a naughty grin of a song that could very well fit onto any Alice Cooper record; all the more amazing that its hyperbolic lyrics, presented from the point of view of the allegorical meanest motherfucker you've ever seen in your life, were penned by Patti Smith (then again, this is the Patti Smith of ?Rock'n'Roll Nigger' fame, too). The repeated line "I'm making a career of evil" concludes one of the catchiest choruses in the band's history — so prepare to forever suffer the harboring in your head of a song that threatens to steal wives, inject brains, and "do it to your daughter on a dirt road", yuck. Nasty.

?Dominance And Submission' hits sparingly, but harsh, its grim simple chords delivering power­ful punches and its lyrics seemingly dealing with the impact of the media on public conscience (I think). The second part of the song (starting off with "In Times Square now people do the polka") is one of the weirdest bits they ever did — the "dominance! / submission! / (radios appear)" sequence is two minutes of sheer delirium, followed by an even more delirious guitar solo, and in combination with all the not-so-innocent references to 1963, 1964, digging ?The Locomotion', and questionable rides in backseats with «Susan and her brother, Charles the grinning boy», this is pretty disturbing nostalgia, if you ask me. They overplay it so hotly that, eventually, it becomes more bizarre and/or hilarious than creepy, but fishing creepiness out of the depths of weirdness is a respectable activity in its own rights, isn't it?

They pull the whiskers of public taste even more strongly on ?ME 262', whose lyrics depict an aerial battle in WWII from the perspective of a German pilot, no less: "Must these Englishmen live that I might die"? Granted, BÖC are an American band, not a British one, and run a slightly lesser risk of being dragged through the mud in New York than they'd run it in London, but still, if you throw in the fact that ?ME 262' is really a happy-sounding barroom boogie number at heart, and that they also illustrated the song vividly on the album cover, that's one hell of a provocative move: "Hitler's on the phone from Berlin, says I'm gonna make you a star...".

As we move forward, it becomes more and more obvious that Pearlman, Meltzer, and Patti Smith have really formed a «secret treaty» to turn Blue Öyster Cult into a critical weapon, launched against public manipulation and sheep mentality — a title like ?Cagey Cretins' speaks for itself, while the ?Harvester Of Eyes' seems to be a metaphor for your TV set. The lyrics are always ambiguous enough to suggest multiple interpretations (or refrain from interpretation altogether), but the «satirical» interpretation complements the music best of all, adding extra depth to these odd riffs, like the «probing claw» mini-melody of ?Harvester Of Eyes' that seeks to implant itself in your brain and take possession of your ears, eyes, and everything else. And the desperately weeping intonations of ?Flaming Telepaths' go together fairly well with the recurrent line — "I'm after rebellion, I'll settle for lies", which is like a funny retort to the Who's ?Won't Get Fooled Again'. It occupies the album's niche for «mini-epic», with Moog, piano, and guitar solos fueling the big pathos furnace until the song suddenly begins to match its ambitions and overwhelm the senses — regardless of whether you understand who the hell are the "flaming telepaths" in ques­tion and whether the lyrics are supposed to be taken socially, personally, or to the incinerator.

My only problem is with ?Astronomy', which closes the record off on another grand note, but with some pretense at «soul» — as if somebody thought it'd be a good idea to pay a joint tribute to Elton John and Van Morrison at the same time, but ended up sounding like Journey instead, or some other second-rate/hand quasi-prog band. To succeed at this sort of thing, they'd need at least one or two individual geniuses among them, a great vocalist or a super-flashy soloist or two, but their strength has always been in the collective realm, and from that point of view, ?Astronomy' is neither as weird as ?Redeemed' nor as tightly assembled as ?Mistress Of The Salmon Salt'. If it is an intentional send-up of «pretentious», «romantic» values, it would be more logical at least to place it in the middle, because using it as a coda aggrandizes it, want it or not, and it does not seem to deserve any proper aggrandization, I think.

Still, these are minor nitpicks next to how altogether consistent and stimulating the record is — one of the most intellectually challenging hard rock artefacts of 1974. Which is not saying that nobody should ever listen to the self-titled KISS debut from the same year in the event of availa­bility of Secret Treaties, because Secret Treaties is not a headbanger's delight, it just uses hard rock as a useful tool for something completely different, and it is this difference more than any­thing else that earns it a thumbs up. It rocks, sure enough, but more importantly, it's quirky, and it cannot be easily cracked upon one listen — and it's one of those «meta-rock» albums which should really only be appreciated once you've thoroughly gone through all of the usual biggies. If you're only in it for the rock'n'roll, well, better stay away from records where Patti Smith might be responsible for at least some of the words.