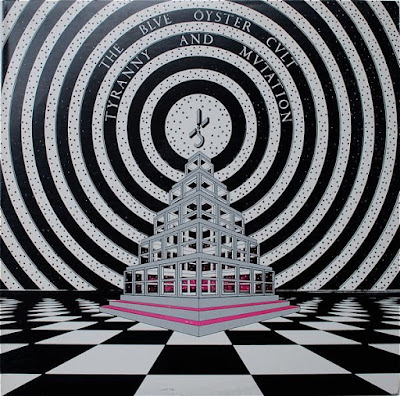 
Some copies came with a printed inner sleeve with a photograph of the band on one side, and a text "Seepage From Deep, Black, Brittle Experiments..." on the other.

Labels are a variation on standard Columbia labels: "The Black" is black-on-red and "The Red" is red-on-black.

It is still a little puzzling why the band decided to re-write ?I'm On The Lamb But I Ain't No Sheep' from the first album as ?The Red & The Black', opening the second one, but at least the rewrite helps immediately tag the significant difference in style between Blue Öyster Cult and Tyranny And Mutation — beginning here and continuing throughout. Unfortunately, it is not a difference that would, from my point of view, seriously benefit the second album.

Although the basic ingredients (band line-up; the Pearlman/Meltzer connection, to which is now linked an additional connection with the still little-known underground personage Patti Smith; emphasis on hard rock values, mixed with a post-modern attitude) remain the same, Tyranny And Mutation is notoriously more «rock and roll» than the «mysterious heavy rock» of its pre­decessor. The production is clearer and much more in your face, as the guitar sound now brutally lashes you across it, rather than emerges from some distant dark enchanted forest. Eric Bloom and the rest of the singers rely more on the snarling, sneering «glam» posturing vocal attitudes on the day than the eerie, hushed, voodoo-drenched deliveries. The tempos are faster, the riffage is briskier and, on the whole, more generic (?O.D.'d On Life Itself' starts out with one of the most common barroom rock patterns in existence). In short, most of this album will probably be more palatable for fans of the Faces or, say, Billion Dollar Babies-era Alice Cooper, than Black Sab­bath or Led Zeppelin. Sort of.

Which is not to say, of course, that the album is just «boring»: the band has simply switched to a type of music where it takes a little more effort to keep things enticing, and since they are still fresh and enthusiastic, they do manage to keep up with the challenge more often than they do not. The only condition is that one must learn to employ both gut feeling and intellectual reasoning at the same time to get the best out of tunes like ?7 Screaming Diz-Busters': the pure rock'n'roll punch of this seven-minute epic is incomparable with anything a band like AC/DC might have to offer, but its structure, switching back and forth between a maniacal «rock'n'roll rondeau» and a whole slew of different time signatures, compensates for this in an experimental manner. The «diz-busters» in question have not been identified, but, judging by the urgency and unstoppability of that main «choo-ka-choom, choo-ka-choom» riff, they are the modern world projection of the «four horsemen», presenting their own deconstructed strategy for the end of the world.

Other songs worthy of extra comment include ?Hot Rails To Hell', which is a little more fast and a little more lyrically obscure than ?Highway To Hell', but essentially deals with the same pro­blem — and, for what it's worth, has a better fundamental riff, not to mention a far more imagi­native coda, in which the other riff of the song almost literally «gets fried» as you descend into "the heat from below" that "can burn your eyes out"; the Patti Smith-cowritten ?Baby Ice Dog' (always refreshing to hear a female-penned lyrical piece begin with the line "I had this bitch you see..."), with one of the most minimalistic and saddest guitar solos ever committed to tape; and ?Mistress Of The Salmon Salt', which starts out with the same chord punch that we all know from the far more famous ?Space Truckin'' but then goes on to make a completely different point (not that I know what point, exactly, but at least it's a catchy one).

On the whole, though, the album tends to drag a little, especially everywhere where the band tries to be moody without being heavy — there isn't a single song on here, for instance, which would match the soulful tension of ?Last Days Of May' or the spookiness of ?Screams': something like ?Wings Wetted Down', whose tales of black horsemen and echoes of empires also suggest apo­calyptic predictions, does not manage to infiltrate my mind on any serious level, sounding more like one of those second-rate late-Sixties psycho-art songs usually done by British people but sometimes copied by Americans as well, and they are not giving it any special flavor.

A thumbs up rating is still guaranteed in the end (wings wetted down, it all turns around), yet, in a way, one could easily build up a case against the band stating that «it all went downhill from here» — actually, it did not, but such an easy, almost casual dropping of some of their most intriguing properties shows how it could. On the other hand, if you prefer worshipping your blue oyster cult with less psychedelic smoke and fog, and more kick-ass rock'n'roll, your feelings will be reversed in comparison, so, naturally, this disappointment should not be taken as an absolute. Besides, this seems to be the very first appearance of a Patti Smith poem in the context of a rock and roll record, which sort of makes it a collectible by itself, I gather.