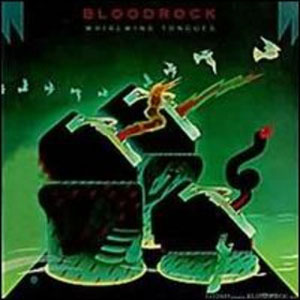 Another God's forsaken album deserving a chance. Who cares if Bloodrock changed its style - an american Hard Rock from the guts - increasing a Progressive flavour? It's really incredible! Sometimes like Kansas (a refined ballad "Guess What I Am")or Jethro Tull (a Beatles' "Eleanor Rigby" with flute arrangements), the band ignores an eminent split, with Warren Ham (vocals) doing an excellent job after Jim Rutledge's departure. A very good shot

A far, far different album than the ones which preceded it. Bloodrock has completely switched their sound up here. No longer are they a Heavy, Doomy, Hard Rock/Prog/Proto-Doom Metal type of band (Yeah, they were hard to categorize.). On Whirlwind Tongues The Progressive Rock has stepped to the forefront. Whirlwind Tongues isn't a bad album per se, but when a band that's as great as what they did as Bloodrock was totally steps away from their own uniqueness, well it's bound to make fans unhappy.
Posted by Zen Archer at 5:05:00 PM