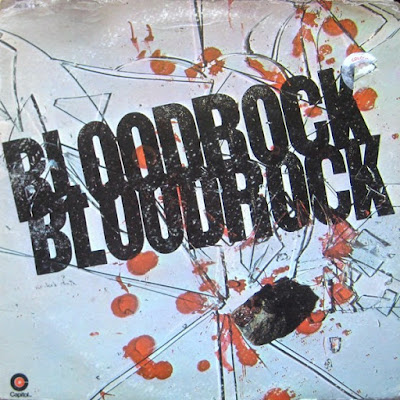 In 1967, Parks left Crowd +1 to become the musical director for The Sonny & Cher Show (the beginning of a long career as a session musician). He was replaced by Lee Pickens (b. December 8, 194?) – guitar. It was also at this time that Stevie Hill (b. Tulsa, Oklahoma) – keyboards/vocals joined the group. They continued as Crowd + 1 until 1969 (though some fans of the band recall the band briefly calling themselves Texas) when they changed their name to Bloodrock, conceived by Grand Funk Railroad manager/producer Terry Knight. They also recorded their first album, the Terry Knight produced, Bloodrock (Capitol ST-435). The album, released in March 1970, peaked at 160 on the Billboard 200 chart.

In 1970, Rutledge moved from behind the drum set to take on lead vocal duties exclusively. Rick Cobb (b. James Richard Cobb III) took over the percussive duties and added his voice to the group as well. This lineup recorded their next four albums: Bloodrock 2 (ST-491), Bloodrock 3 (ST-765), Bloodrock USA (SMAS 645), and Bloodrock Live (SVBB-11038).

Bloodrock 2 was their most successful album peaking at #21 on the Billboard Pop Album Chart in 1971 mostly on the strength of their single "DOA" which reached #36 on the Billboard Hot 100 chart on March 6, 1971. "DOA" also gave the band considerable regional exposure throughout the Southwest and West, particularly in Texas and Southern California. "DOA" was probably the band's most well known and well remembered single. The motivation for writing this song was explained in 2005 by guitarist Lee Pickens. “When I was 17, I wanted to be an airline pilot,” Pickens said. “I had just gotten out of this airplane with a friend of mine, at this little airport, and I watched him take off. He went about 200 feet in the air, rolled and crashed.” The band decided to write a song around the incident and include it on their second album.

In 1972 Lee Pickens left to form The Lee Pickens Group and released the album 'LPG" in 1973 on Capitol Records. Jim Rutlege retired from active music altogether, however in 1976 he also released a solo album on Capitol Records entitled: "Hooray for Good Times". Rutlege was replaced by Warren Ham in early 1972. The subsequent album, Passages was the last time Bloodrock visited the charts. It peaked at #104 on the Billboard 200 in 1972.

1973 brought another personnel change: Rick Cobb vacated the drums to be replaced by Randy Reader. This line up recorded one album: Whirlwind Tongues (1974).

The end of the road for Bloodrock came in 1975. Randy Reader left the group and an album, Unspoken Words, remained unreleased until 2000, where it was included as part of the CD release Triptych (along with Passage and Whirlwind Tongues). Unspoken Words featured Bill Ham and Matt Betton.

A reunion concert featuring five of the six original members (Jim Rutledge, Lee Pickens, Ed Grundy, Nick Taylor, Stevie Hill, and Chris Taylor in place of original drummer Rick Cobb III) was held on March 12, 2005 in Fort Worth, for the benefit of their keyboardist Stevie Hill. The reunion concert was filmed.

When listening to Bloodrock's debut, I just want to punch out windows and scream my brains into jelly.  This is the delinquent jam, the sound of kids growing hair everywhere and going feral.  If bands could be explained as personalities, Black Sabbath would be sulking alone in his room while Grand Funk was getting laid down the hall.  Bloodrock?  He'd be out committing acts of vandalism and running from the police, of course.  Probably with that MC5 punk.

The record has awesome production, courtesy Terry Knight - made out of pure guts, knuckles and broken glass, the thing just blisters your ears.

The songs are incredibly simple and somewhat repetitive but Bloodrock riffs are always kind of freaky in how they're played.  Consequently, they rarely ever get boring.  They verge on metal-heavy but owe more to biker rock "with their old lady's perched behind them - like witches riding high powered brooms" (The Wild Angels promo).  Lead guitarist Lee Pickens burns it up with a thuggish Hendrixian finger.  And their organist, Stevie Hill, actually kicks major ass, no R&B bullshit flying out of his B3, that's for sure.  Drummer / Vocalist  Jim Rutledge hails from the "Big Man" school of singing - not like these kids today, twenty five years old trying sound like they're twelve - this guy sounds as big as a mountain!  Being the drummer, too, his style is steady / catchy and that is alright with me, man.

The highlights are the opener, "Gotta Find a Way", "Double Cross", "Timepiece", "Wicked Tru- LOOK THE WHOLE ALBUM IS KILLER, EVEN THE MELLOW "FANTASTIC PIECE OF ARCHITECTURE".

"Melvin Laid An Egg", beside being a ferocious piece of Dinosaur Scrot Fuzz, must have been an inspiration on some of Blue Öyster Cult's lyrical weirdness.

Sandwiched between the December of 1969 release of Grand Funk Railroad's Grand Funk LP and GFR's Closer to Home in July of 1970, GFR's heavy-handed manager/producer Terry Knight worked the board for Bloodrock's self-titled debut recording. The roots of Bloodrock date back to the mid-sixties, but the group helped bury the sixties flower power scene with their dark proto-metal.

Knight not only produced the nine tracks for the Bloodrock LP, he also designed the splatter-scene cover sleeve. Like the power charged trio from rusted-out Flint, Michigan, that Knight guided, Bloodrock was signed to Capitol Records. Bloodrock's Steppenwolf crossed with Deep Purple "Gotta Find a Way" opens the lengthy recording that features five songs that eclipse the five-minute mark. "Gotta Find a Way" is laced with backmasking near the start of the cut. Spin it backwards at your own risk.

"Fatback" and the blooze struttin' "Double Cross" highlight the album. Bloodrock bring a heavy psych vibe to the recording, and if anyone ever wondered where Chicago's Peter Cetera came up with the inspiration for the intro to the sobering "Wishing You Were Here", look no further than the beginning of "Double Cross".

Bloodrock chased their debut shot from the studio with their second LP in released in August of 1970. While Mark, Don and Mel ruled the early '70s high school halls throughout the states, Bloodrock never escaped dark cult status.
Posted by Zen Archer at 4:14:00 PM