Stephan Micus
1985
East of the Night 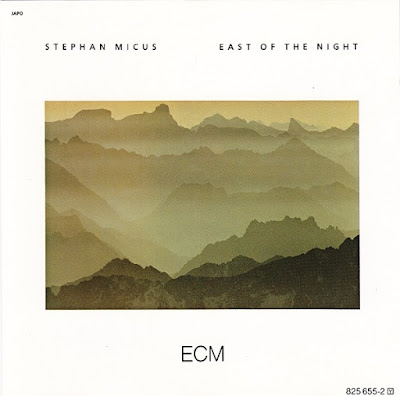 East Of The Night, released in 1985, is one of Micus’s most melodic albums. Its two long tracks epitomize, ever so humbly, the dictum of less is more. The title piece, a conversation for 10-string guitar (an instrument of his own design) and shakuhachi, feels like a dialogue between master and disciple. Micus’s guitar combines the reediness of a lute with the subtle ferocity of a koto, making it a natural partner to the shakuhachi’s dawning breath. Each pluck of a string works the upholstery of the sky until a surface of untreated wood is revealed behind it. Details of handiwork once obscured by finery and ornament now become naked art. With the softness of a windblown curtain, the plectrum moves from foreground to background before the shakuhachi takes on a Milky Way texture in a suite of thrumming stardust. The flute fragments, multiplies, and ends the set’s first half on a congregational sigh.

“For Nobuko” is dedicated to Micus’s wife, recipient of this powerfully intimate solo for another custom instrument: the 14-string guitar. Its flowerbed extends far beyond the window box and trails vines from one domicile to another, stretching across vast plains of tundra toward immaculate love. It encompasses the dedication of one human being, whose balance is achievable only by offering himself up to another’s fundament, into which the listener’s own messages might also be divined.

Like two vapor trails, Listen to the Rain and East Of The Night mark their respective paths of motion by holding relatively still against the blue. One is the parallel of the other, never intersecting except by the illusion of perspective. Together, they are further significant for easing the JAPO sub-label’s 14-year flight in for a landing, thus ending one fantastic voyage by barely beginning another.