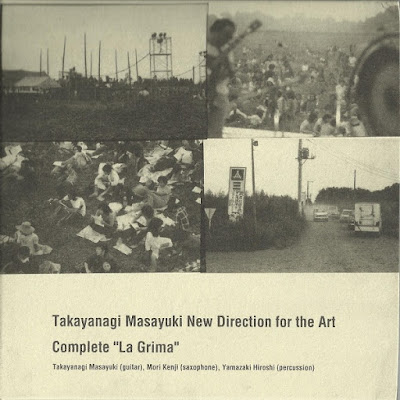 Recorded at Genya Festival in Sanrizuka on 14 August, 1971. Thanks to Takayanagi Michiko, Saito Yasunori (jinya disc).


"La Grima (Tears) was performed on August 14, 1971, at the Genyasai festival in Sanrizuka, Japan. The first six minutes or so of this performance can be heard on the omnibus LP Genya (released on CD in 2004). This CD presents the complete, unedited version of the performance.
As if to slash through the audience's scornful, jeering reaction to Takayanagi's opening remarks, the group launched into a fiercely convulsive performance. Despite having a variety of objects thrown at them, Takayanagi and the others kept on playing. They ended the performance to a storm of booing and shouts of "Go home!" For this release it was meticulously remixed and then mastered. Thus, the performance of "La Grima" by the newly-launched New Direction for the Art has been reborn in a fresher, more vivid form.
The photos are from the scrapbook of Kenji Ishiguro, who was shooting on site in Sanrizuka at the time. Among them are a couple of rare shots in which Takayanagi can just be seen."-Doubtmusic

During the 1960s and early 1970s the Japanese government sought to build a new airport (to become Narita International) east of Tokyo to relieve congestion at the airport in the city. Through complications and resistance by those who lived on the land desired by the planners, the government started expropriation procedures towards farmers and homeowners, who fought back and were quickly aided by leftists who feared the expansion was primarily for US military use in event of a heating up of the cold war. Though the protests were often violent, the evictions continued and the inevitable construction came. As with most movements on the peace and love side of the political spectrum, art was a part of the expression of frustration, and some involved in the anti-airport cause arranged for the Genyasi festival to take place in Sanrizuka, a town near the site.

On August 14, 1971, near the height of the land appropriations, Masayuki Takayanagi and his group, generally monikered New Direction Unit but here labelled New Direction for the Art, played the Genyasi. The performance, fully released here for the first time on this CD, was a fiery, propulsive affair and the reaction to it was in like kind. As briefly summarized in the album notes the band was jeered, criticized, and had various items thrown at them while playing, and chants of "go home" erupted after they finished. All good to point out that no matter how radical people may envision themselves they are often quite behind the times in their musical tastes and reactionary in opposition to its creation. (You can lead an activist to water but you can't keep him from spitting in his own drink.) It's understandable that music of this (truly radical) kind can be rejected by tender ears, even today some 35-plus years later, but the power in evidence on this recording is undeniable.

Takayanagi's improvised work with his cohorts has tended to veer towards the ferocious chaotic stylings of the European free jazz scene, at least to my not-so-tender ears, but in La Grima the airs are unmistakably of the African-American side of this particular genre. Takayanagi himself spreads shards of guitar noise in a blistering manner reminiscent of Sonny Sharrock while maintaining some of the strange stateliness of Derek Bailey. Saxophonist Kenji Mori seems to be channeling Archie Shepp or perhaps some of the looser, more psychotic episodes of Albert Ayler's musicianship. It's left up to percussionist Hiroshi Yamazaki to cling closest to the old continent by defying any sense of rhythm. All together it is murderously brilliant and perfectly representative of troubled times. With a feel of focused complaint and resultant speculation often found in Coltrane's late career, the single lengthy work here still spazzes and perculates as if the civil rights ferment of the '60s needed to be squeezed through a tight shutter-point of new realization to emerge fully formed in the more cynical and dangerous '70s. Perhaps a pivotal moment for Takayanagi? A rejection of a Taylor-esque mild consideration and an embracing of a Brotzmann-esque pure, cleansing blast? I could never be certain as the maestro is currently deceased, but what I receive from this disc tells me it is of no great matter: the prophecy rejected in the past does not necessarily lose its meaning because of the public's antipathy, but reveals - as all good art should - to the individual. It reveals to me the apothesis of human uniqueness.
Posted by Zen Archer at 12:28:00 AM