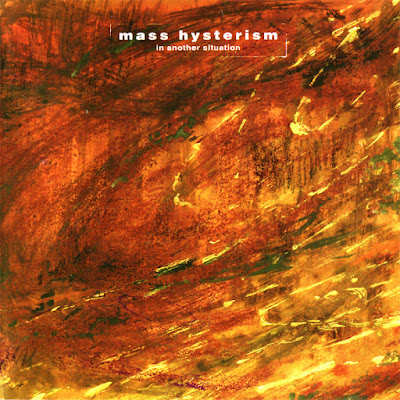 Keith Whitman:
"for me, this disc has long been one of the highlights of electrified free jazz from any era/location. fans of rudolph grey’s blue humans and latter-day free-energy/rock-damage practitioners such as lambsbread owe it to themselves to check this out..."

2. Seriously, unless you're a very specific type of music listener, you probably won't like this

3. To elaborate, there are no themes here. No riffs. Nothing that remotely approached melody. No solos. Nothing to tie this to any specific type of music outside of the fact that it is made by instruments. It's exactly the type of thing people think about when they use the cliche that it's not music, just noise.

4. What there is in place of all those things is the most important thing: atmosphere. Takayanagi coaxes hellish torrents of feedback over proto-blastbeat drumming to give you the impression of being in the middle of a tornado. It's chaos in the purest form imaginable.

5. Do I need to further re-iterate that you probably won't like this?

6. The reason that I like this? I'm attracted to sounds I've never heard before, more and more as i get older and seem to have run out of "new" things to listen to. I appreciate well made revisions of known forms, but even more I love being surprised.

7. That's not to say that I've never heard anything like this before, but I don't think I've ever heard it maintained at such a startling level for any similar amount of time. I keep thinking that these guys - the drummer especially - should have passed out, gone deaf or run screaming from the beast they've created long ago, but it keeps going.

8. Let me reiterate: these guys made this thing live. There are no breaks. The track demarcations are nigh-on arbitrary, it's just a 40-minute barrage of ear piercing guitar torture and maniacal drumming. Forty goddamn minutes.

9. So yeah, you won't like this. I'm warning you because I care.

Takayanagi found it: the most suitable title for an album in the whole history. Mass Hysterism.
While the duo of Takayanagi and Akira Ijima or how the guy was named boils really, really hard and it reduces Borbetomagus to ashes in terms of harshness, it also reduces Hijokaidan to tiny atoms of crap in terms of interest it can span (so please, take your time and do not think of this album as if it were the disposable run-of-the-mill piece of Japanoise). Both guitar players are extremely into their thing, and each part of the four of this album does surprise through the timbral and tonal maelstrom, throwing notes and feedback away in the most random, irrational manner man could barely dream of. The percussion provided by Yamazaki might not be the ultimate groove, since he does not hold any rhythm whatsoever, but one thing we cannot deny is that THE GUY BEATS THOSE DRUMS VERY, VERY RELENTLESSLY. So each beat is more than audible, and this idiosyncratic web of beats sets a quite adequate background for the electric clash between the two ”vintage jazz” guitar greats.
All in all: no rhythm. No logic. No trace of ”melody”. Extremely harmonic, a true delight for the senses awaiting to be fried. Embrace it and do not let it go if you know you can, and do not even try trying to hear it if you are not sure that you want.
Posted by Zen Archer at 12:14:00 AM