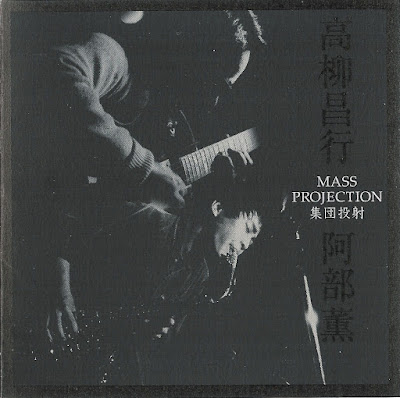 
This album is part one of the concert that continues with Gradually Projection, catalogued as DIW 415. Mass Projection is the insanely torrid concert meeting of free music masters Kaoru Abe (now deceased) and guitarist Masayuki Takayanaga. Now into the 21st century, there are few recorded dates -- live or in the studio -- that have reached a level of white-hot improvisation or communication as this one has. And in this case the critic's opinion makes no difference; Evan Parker, Derek Bailey, Tony Oxley, John Surman, Ray Russell, and others have proclaimed the integrity of this skronkfest as seminal in their own development as improvisers. Consisting of two long tracks (over 20 minutes each), what is being blasted to the angels of heaven is an active study in the pursuit of musical and language boundaries, those imposed on each instrument separately and in tandem with one another in performance. On first listen, it may be difficult to discern where the "listening" aspect of improvisation comes in, because both players go full bore for the entire performance -- talk about an exercise in stamina. But there is also listening in speech. If one pays careful attention to Takayanaga's guitar tones, they actually shift accordingly to the lines played by Abe and the way he moves from high to low register, seldom playing in the middle. There is also, in all that screeching and bleating, an attempt to "sing with one voice." When the dynamics do change and one instrument drops out, the overtone quality of the other shifts to compensate. Most importantly, one can plainly hear how often they start and stop on a dime in unison. Make no mistake, what you are hearing is noise -- deafening, roaring, ear-splitting, heart-wrenching noise -- but it is made with such purpose, such sincerity and rage, that this music sounds like nothing less than men who are screaming to one another in tongues of fire while trying to fly with the beautiful wings of crazy, illuminated, dark angels of revolution and life.