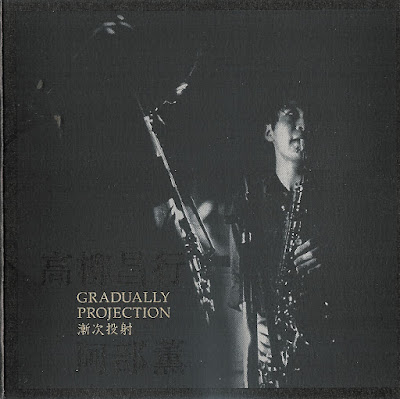 
Gradually Projection is reissue of a 1970 recording that paired two of Japan's most innovative improvisers, reedist Kaoru Abe, who died in 1979, and guitarist Masayuki Takayanagi, who is well-known for his work with the New Directions Ensemble. DIW has a program going to reissue all of the recordings from Abe's brief career, featuring him in various solo, trio, and duo settings. PSF is doing the same with Takayanagi, issuing his New Directions material and solo recordings. Neither man ever achieved anything near what they accomplished on Gradually Projection, however. This is not an assault in the sense of, say, an Evan Parker record where he is exploring all the possible microtones that can be wrung from his horn in a given space at a given time. Nor does Takayanagi's restrained, unwieldy guitar playing draw the same scratches in the dirt that Derek Bailey's do, though there are similarities in both cases. Given that this was recorded in 1970, it is unlikely this pair heard the British duo or vice versa, though they may have heard of them. What's there is here, a deep listening, intuitive listening that takes into account more than other players' breath, posture, and manner of response -- rather than attack. Abe primarily plays alto (and makes it sound like a tenor) and bass clarinet here, though he digs out his trademark harmonica and a reeded shakuhachi flute. He has no interest in any of his instruments remaining what they are. His attempt throughout is to transform their texture, voice, and in some cases by removing some tubing from the alto, their physical bodies as well. Takayanagi's acoustic guitar is more subtle but nonetheless intense, disorienting in the percussive manner in which he pulls at strings and hammers on chords. There is the feeling of Coltrane and Archie Shepp's New Thing at Newport here, or the early Anthony Braxton/Derek Bailey duets, but still this disc slips out from underneath the comparisons as unique. What Gradually Projection is about is the projection of newly realized tonalities into the body of sound as a whole. Between the musicians -- who were placed very close to one another facing each other in the session -- microtones are tossed back and forth, and in the space between, new ones seem to appear. Abe also creates a microphonic environment for Takayanagi to play from, in somber, reflective passages and in angry intense ones as the work vacillates between them randomly, always dictated by the dynamic of tone and phrase. Dramatic episodes are few, though the dynamic range is colorful and varied. Over 49 minutes in 1970, bridges to the musical past were burned, leaving only the cracked sky of a present that was asserting itself with an informed, sophisticated, yet primal energetic roar. To call this disc a classic is to radically understate the case. This title created a Japanese underground in music that continues to flower in 2001 in all kinds of settings. For any person interested in vanguard jazz, free improvisation, or the avant-garde in music, this disc is essential listening.
Posted by Zen Archer at 11:55:00 PM