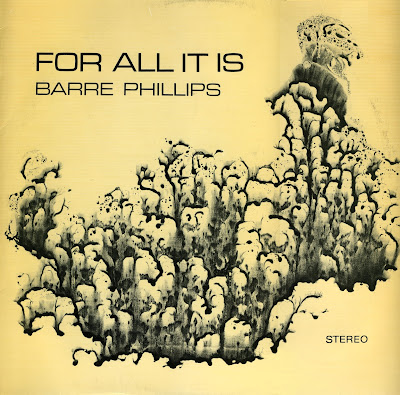 This unusual meeting of minds pits bassists Barre Phillips (who also penned the proceedings), Palle Danielsson, Barry Guy, and J. F. Jenny-Clarke with percussionist Stu Martin in a tactile playoff with mixed results. It’s remarkable to think that four behemoths could sound so open, and so one shouldn’t be surprised to encounter a few tangles in “just 8.” For the most part, however, this introductory track maintains the clarity of separation that characterizes the album’s latter remainder. Either way, it’s a jaunty ride into an unprecedented sound-world. Martin anchors “whoop” with his engaging loops amid a menagerie of pizzicato signifiers. Along with “few too” it evokes a jack-in-the-box weeping for want of exposure. From that unrequited lament comes a bright promise, skewed by a hope that the world turns not even for itself. It’s a melancholic hope, to be sure, but hope nonetheless. Martin’s absence here makes the track an early standout: just the rocking of bows pressed into myriad shapes by insistent fingertips. “la palette” and “y en a” form another pair, taking a decidedly architectural approach to this most warped string quartet. Together, they form a cycle of destruction, pain, and healing.

The album only really comes together in the final two tracks. Where “dribble” proves an apt title for its dotted ritual, “y. m.” dances like an anonymous car alarm stripped of its batteries and given new acoustic life. The latter is a particularly complex, anchored piece that spits out some utterly brilliant turns of phrase.

For All It Is, for all it is, is above all an exercise in linguistics. Its cognates are familiar, even if the grammars are not. Although I’d likely recommend this one least out of Phillips’s otherwise astonishing ECM outings, for the completist it will be an intriguing blip on the radar of all four bassists’ careers.