AMM III - 1980 - It Had Been An Ordinary Enough Day In Pueblo, Colorado

AMM III
1980
It Had Been An Ordinary Enough Day In Pueblo, Colorado 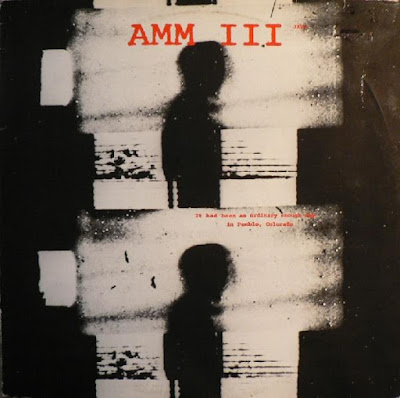 
By the time this obscure JAPO album was released in 1980, AMM was 15 years old. The British free improvisation outfit, credited here as “AMM III,” was already an underground legend, and thankfully has stayed that way, even now preserving its integrity as an exploratory unit. For this brief incarnation, founding members Keith Rowe and Eddie Prévost set out as a duo, respectively combining guitar and percussion in a real-time evolution that fans of Evan Parker are sure to appreciate. Like Parker, Rowe and Prévost spend as much of their time listening as playing, soaking in the feeling of the surrounding soil before enriching it with just the right minerals.

“Radio Activity” is both mantra and anti-mantra. Rowe’s use of a transistor radio underscores the title as a method of operation, leaving behind its descriptive properties to shrivel in the sun of another day. The metallic details put forth by the two musicians, at once percussive and speech-oriented, seem to fold themselves like sheets of self-aware origami paper. The sounds of broadcasts moving through a flanged portal are complemented by an amorphous electric guitar, its ochre pigment drawing a halo without an angel. In this amphibious dronescape, valleys eventually turn into peaks as Rowe and Prévost lock into powerful, staccato interplay before compressing into a jam between molecules.

After the massive parentage of this first track, the ones that follow feel like its offspring. “Convergence” is the youngest sibling, a frail yet expertly tuned entity whose potential for strength is unlimited. The elasticity of “Kline” pegs it as the eldest child. Its swansong is written on parchment, a brittle medical document that is beyond the need for prescription. Frenzy ensues, throughout which Rowe treats the air like a pin cushion while Prévost shines a light through every eye like a star.

The two middle children are intersectional beings. “Spittlefields’ Slide” is exactly what one might expect it to be: a stuttering and warped chain of expectorations. It’s also a fine exercise in restraint that grows even as it flounders into dust. “For A” sounds as if the musicians dismantled a pay phone and made music with all the loose change gutted from within, faithfully documenting every snap of communication in a game of resuscitated conversations.

Your guess is as good as mine as to what any of the above to do with the album’s title, but I like to think that somewhere in Pueblo, Colorado there exists an echo of these soundings, ghostly yet content in its geographical prison.