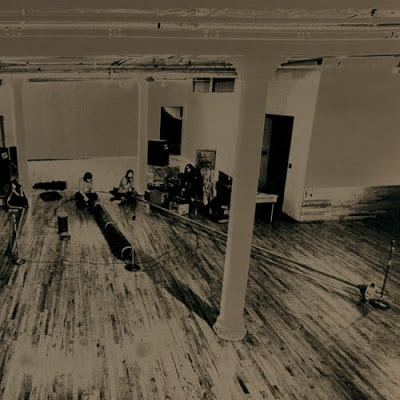 Thirty-five years since the performance of Yoshi Wada’s “Earth Horns with Electric Drone” was recorded in 1974, Japanese labels EM and Omega Point have finally made the recording commercially available. This fourth and ultimate installment of their Wada series is, musically speaking, the most demanding for its sheer duration and the relentless stasis. On this recording, Rhys Chatham, Garret List, Barbara Stewart and Wada perform on ‘Earth Horns’ and Liz Phillips manipulates a synthesizer to provide the continuous drone that’s either mesmerizing or unbearable, depending on your point of view. The CD version of this recording is a 77-minute excerpt from the 162-minute performance. The three-LP version captures the entire event.

I find the piece a joyful exploration of the space between noise and harmonicity. Wada designed the Earth Horns with the alphorn in mind, using plumbing materials in lengths of 10 and 20 feet and calibrated in octaves. These are combined with an electronic tone, tuned to the harmonics of the AC line cycle (or electric hum) of the room. Together, they produce a visceral experience of resonating overtones that vibrate with the physical bodies and change with the movements of those bodies in their environment. While the fundamental tones remain the same throughout, the shifting balance of the overtones, the subtle pulsing and beating between tones become more and more perceptible.

The disc itself is a gorgeous object in its own right. The CD package includes stunning photographs of performances of the piece at the Kitchen, and with the Merce Cunningham Dance Company at Nassau Coliseum. The liner notes contain original program notes by Wada in English, accompanied a Japanese translation for the Omega Point release. On the reverse side of the folded sheet is a yellowed print of an original poster by Fluxus guru George Maciunas announcing a performance of Wada’s works at the old Film Archives at 80 Wooster street.

Wada’s delightful experiments in sound certainly deserve better than archival status. But at the same time, I also question the motives for the serialized churning out of these so-called “lost masterpieces,” suddenly resurrected after decades. If the point of the performance lies in how the distinctness of the process of “recycling and reinforcing sound change” in the singular “acoustic time / space of the performance” as the composer suggests, a recording of this process seems, in a way to miss the point. What, of this performance is actually captured in the record? It also raises the question, is the compromised sound quality of the recording excusable because of its sexy collectability factor?


Does anyone out there have the complete LP set and be willing to needledrop it for the rest of us?