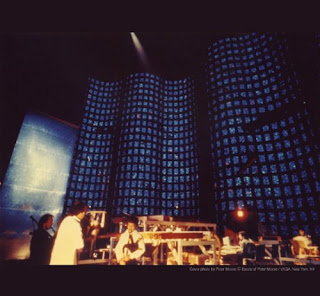 Performed and recorded at the Great Hall of the New York Hall of Science, New York on November 8, 1987. Sound installation instruments: pipe organ, suspended metal sheet, siren, pipe gong, etc provided by Yoshi Wada.
Mastered at Magic Hour Studio, Osaka.
Issued under license from Yoshi Wada.
Special thanks:
To John Driscoll and David Rayna, who made this performance possible, to Peter and Barbara Moore/VAGA and Paula Mazzotta/VAGA for permission to use CD front cover photo,
to Marilyn Bogerd for sound installation photo, to Tashi Wada and Tim Olive for helping with English liner notes.

Yoshi Wada moved from Japan to the U.S. in the mid-'60s, after which he fell in with Fluxus types like George Maciunas and La Monte Young. While he learned from them about the merit of broad interests and deep study, Wada has followed his own restless muse, sparing little time for music business careerism. Even though he has worked with sound for decades, The Appointed Cloud is only his third record.

Cloud, recorded in 1987, documents a pivotal point in his career. Wada’s LPs for India Navigation and FMP, released in the early '80s, were artifacts of performances shaped by environments. For "The Appointed Cloud," Wada built a computer-governed 80-pipe organ in the New York Hall Of Science. It was reportedly a hit with the kids, who could start, stop and stack the piece’s segments with the push of a button.

Wada's performance from '87 featured a percussionist and three bagpipers (Wada among them), who added more layers of sound to the score. The recording is comprised a single one-hour track, requiring that you give it time and attention, but believe me, you’ll get a better immediate return from The Appointed Cloud than your 2007 401K contributions. Conventional organ voices rise out of mechanical hums, sustaining and layering long tones; the pipes and booming percussion are like a Greek chorus, adding their voices at key moments that ratchet up the intensity and redirect the narrative. The music ranges from contemplative church passages to moments of pure Scotch battlefield terror to pre-operatic Philip Glass terrain. Hocketing phrases seem to grow out of low drones and high notes like rocks surfacing as the tide recedes. It’s a marvelous immersive experience, one best played loud enough to hear the dance of overtones.