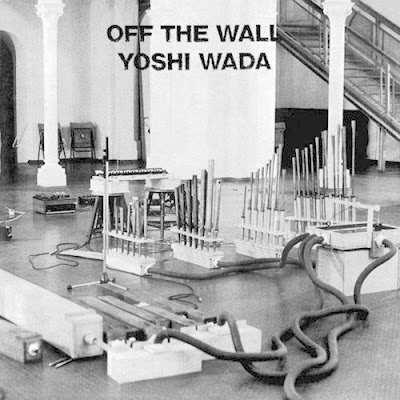 Gatefold three panel paper-sleeve with obi and insert containing a graphic score and a reproduction of the original liner notes for "Off the Wall".

Issued under license from Yoshi Wada (tracks 1 & 2 courtesy of FMP-Publishing). Special thanks to Jost Gebers and Tashi Wada.

Within the canons of the avant-garde, Minimalism, and music which utilizes drone, few are greeted with the awe inspiring respect offered to Yoshi Wada. He is a master who creates riveting effect with even the slightest whisper of tone. Wada entered public consciousness, like a number of other prominent Minimalists, as a member of Fluxus. Most of his early works were realized in galleries rather than concert halls. Like La Monte Young, Henry Flynt, and Terry Riley, he was a student of Pandit Pran Nath, offering insight into the careful control he imposes on his works. Unlike most of his peers, Wada was slow to record. His first album Lament For The Rise And Fall Of The Elephantine Crocodile wasn’t released until 1982. It was followed in 1983 by Die Konsonanten Pfeifen a cassette issued in an edition of 50, and finally by Off the Wall in 1985. It would be twenty three years before his audience received another recorded document. By the time I encountered Lament.. and Off the Wall during the 90’s, they were legendary and virtually unobtainable.

Off the Wall was originally released by the German Free-Jazz imprint FMP. Strangely it finds itself slightly more at home with its catalog (in the company of artists like Hans Reichel) than it does within Wada’s. Most of his recorded output deals with duration and constrained tones slowly crossing to generate overtones, harmonics, and atonality. Though Off the Wall does contain all these core features, its totality is another beast. The work is composed for two bagpipes, an organ, and drums. It begins as you might expect, two interlacing bagpipes shifting across one another, underlain by an organ drone. The trio create some of the most beautiful harmonic interplay I can call to mind. It’s mesmerizing. Around the seven minute mark a timpani begins to sound. The bagpipes respond with a flurry of activity. Their notes beat against each other in a barrage of rhythms and tonalities.  Structurally Off the Wall is one of the most complex of Wada’s works. Over two sides it evolves from pure harmonic drone, toward the kind of percussive repetition utilized by Steve Reich and Terry Riley, back to a more reduced state, and then off again into a spectrum of interplay more familiar to Free-Jazz. It’s absolutely wonderful.